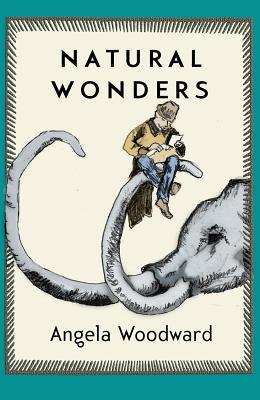 Natural Wonders is a novel in the form of a series of lectures about the earth and its prehistory. In it, a grieving widow assembles an idiosyncratic history of the earth’s history based on her understanding and impressions of her deceased husband’s papers.

In Natural Wonders, Jenny is given the task of assembling a memorial edition of her recently deceased husband Jonathan’s lecture series about the physical history of the earth. With little knowledge of his work or of Jonathan himself, Jenny constructs from his fragmentary and disorganized notes her own version of our planet’s past.

Presented as a series of lectures, Jenny’s earth history is an amalgam of stories from science and about scientists—a Serbian mathematician and his theory of the ice ages, a Swiss doctor camped on a glacier, the mysterious materia pinguis thought to have drifted down from stars to form fossils. Into these stories she interweaves scenes from their marriage as well as material she finds on Jonathan’s shelves. In her history, an explanation of continental drift becomes enmeshed with a schoolboy’s erotic encounter with an older woman. Icebergs in an Andean lake launch a woman’s jealous affair with a third-rate actor, and H. G. Wells’s Island of Dr. Moreau is dramatically recounted in new form.

Natural Wonders mixes mythology, popular fiction, and a misfired romance with the story of the earth hurtling around the sun. From intimately human to geologic to cosmic, it explores change, love, and loss.

Praise For Natural Wonders: A Novel…

"Woodward (The Human Mind) delivers an intelligent and wildly imaginative novel. . . . Along with clever commentary on academia, Woodward skillfully entwines many themes into a single narrative that explores the changing nature of relationships and how humans remain in 'inexhaustible creeping flux.'"
—Publishers Weekly

"Exploring everything from the crackling of the earth’s surface and glacial fields to stories of explorers and scientists to tales of murder and sex to the slight and sad gestures of [the characters'] existence, Natural Wonders is a wide-ranging meditative book that is by turns delightful, clever, and heartbreaking."
—Rain Taxi

“Natural Wonders is a strange book, in the most flattering sense of the word. It’s a story animated by a superabundance of scientific information and all the primal bad feelings of human emotion/experience: guilt, worthlessness, failure, loneliness, self-absorption, and regret. There is a recursiveness to the sentences in the book, with phrases and sometimes whole paragraphs returning to remind us where we are, a lot like ice ages have periodically frozen oceans and locked up continents over the course of the planet’s history. It’s a helpful device in a book that can alternate at any moment between science history and dramatic metaphorical tangents."
—Necessary Fiction

“Empiricists are us. We know what we know through our sensing apparatus. A fact, we know, is a thing done, and once it is done it is done and leaves only artifact and residue, evidence of its happening. But we also know (we’re giddy with fear) that our senses are so easily fooled. And in that fooling lies great wonder! Angela Woodward in Natural Wonders knows what the grand satirists—Swift and Sterne and Defoe—knew about the great tectonic paradigm shift to this new way of knowing. Her deadpan take on the scientific deadpan is expansive and microscopic, hilarious and heartbreaking. The book is a studious study of silly seriousness, a calculating engine collecting forever the erotic and effervescent data of our empirical world. It is so surely never sure of itself. It can’t not believe its eyes. Behold! Observe! See! The natural wonder of Natural Wonders as it does a bang-up tangled tango with the tabula rasa.”
—Michael Martone, author of Michael Martone and coeditor of Winesburg, Indiana: A Fork River Anthology

“Natural Wonders is an amazing work about sentience and biologic magic, its structure built and layered with beautiful rigor. It is full of delicious sentences that will pull readers into its meditation on story making and the awe that seems to be just outside our sight. Woodward’s novel contextualizes our shred of a civilization so vividly readers will see the world with new eyes. I am sure you will love it!”
—Stacey Levine, author of The Girl with Brown Fur and Frances Johnson

Angela Woodward is the author of The Human Mind, End of the Fire Cult, and Origins and Other Stories, which was chosen by Gabriel Blackwell as the winner of the 2014 Collagist magazine chapbook competition.
Loading...
or
Not Currently Available for Direct Purchase