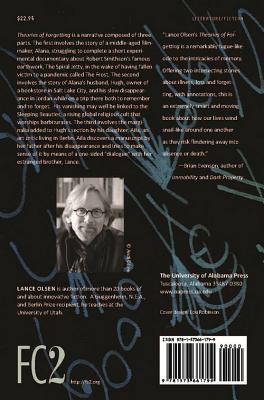 Theories of Forgetting is concerned with how words matter, the materiality of the page, and how a literary work might react against mass reproduction and textual disembodiment in the digital age--right from its use of two back covers (one "upside down" and one "right-side up") that allow the reader to choose which of the novel's two narratives to privilege.

Theories of Forgetting is a narrative in three parts. The first is the story of Alana, a filmmaker struggling to complete a short documentary about Robert Smithson’s famous earthwork, The Spiral Jetty, located where the Great Salt Lake meets the desert. Alana falls victim to a pandemic called The Frost, whose symptoms include an increasing sensation of coldness and growing amnesia. The second involves Alana’s husband, Hugh, owner of a rare-and-used bookstore in Salt Lake City, and his slow disappearance across Jordan while on a trip both to remember and to forget Alana’s death. The third involves marginalia added to Hugh’s section by his daughter, Aila, an art critic living in Berlin. Aila discovers a manuscript by her father after his disappearance and tries to make sense of it by means of a one-sided “dialogue” with her brother, Lance.

Each page of the novel is divided in half. Alana’s narrative runs across the top of the page, from back to front, while Hugh’s and his daughter’s tale runs “upside down” across the bottom of the page, from front to back. How a reader initially happens to pick up Theories of Forgetting determines which narrative is read first, and thereby establishing the reader’s meaning-making of the novel.

Praise For Theories of Forgetting…

“Lance Olsen's Theories of Forgetting is a remarkably fugue-like ode to the intricacies of memory.  Offering two intersecting stories about illness, loss and forgetting, with annotations, this is an extremely smart and moving book about how our lives wind snail-like around one another as they risk flindering away into absence or death."—Brian Evenson, author of Immobility and Dark Property

Lance Olsen is the author of eleven novels, one hypertext, four critical studies, four fiction collections, and two textbooks about writing innovative fiction. He is the recipient of Guggenheim and N.E.A fellowships as well as the Berlin Prize and a Pushcart Prize. His short stories, essays, poems, and reviews have appeared in a variety of journals and anthologies, including Conjunctions, Denver Quarterly, Black Warrior Review, Village Voice, BOMB, and Best American Non-Required Reading. He teaches experimental narrative theory and practice at the University of Utah.
Loading...
or
Not Currently Available for Direct Purchase