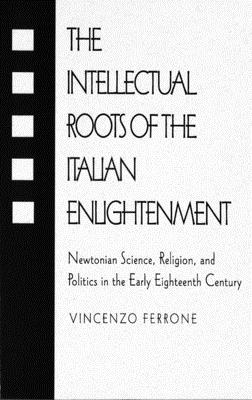 Intellectual Roots of the Italian Enlightenment

Vincenzo Ferrone has undertaken the ambitious project of examining the diffusion of Newtonianism in Italy in the seventeenth and eighteenth centuries and of delineating its fundamental significance for the culture of the Enlightenment. His innovative view totally changes the traditional interpretation of Italian history of the early eighteenth century, which viewed Italy as a peripheral reality, marginal to the theatre of intellectual confrontations that developed in the so-called crisis of the European mind and gave rise to the Enlightenment. Through a rich and massive archival search that uncovered important secret documents such as private letters between bishops of the Roman church, scientists and Protestant theologians, Ferrone unveils the existence of an original Italian debate about the ideological consequences of the spread of Newtonian theories. In Italy as in Western Europe, modernity started with reflections on the Newtonian Enlightenment, the new natural theology, materialism, freedom of thought, the epistemological basis of political economy, and republicanism. In Rome, the health of Gnosticism, distinguished clericals used Boyles Lecturer and the Anglican apology of Samuel Clarke to reform Catholicism. The ancient project of Galileo and the Academy of Lincei, aimed at founding a great alliance between modern violence and faith, was pursued by these enlightened Catholics through Newtonian natural theology. Ferrone's work presents a classical example of the new intellectual history, examining both the scientific ideas themselves and the cultural and social context in which they were broadcast.

Vincenzo Ferrone is professor of modern history at the University of Venice Ca Foscari and the author of several books on European intellectual history.
Loading...
or
Not Currently Available for Direct Purchase