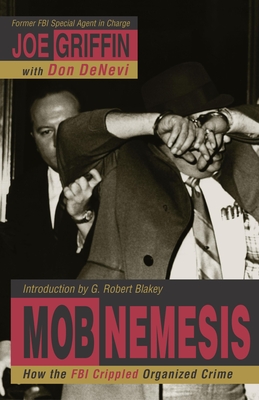 How the FBI Crippled Organized Crime

While J. Edgar Hoover was denying that there was such a thing as organized crime, in the forties, fifties, and sixties the mob was busy forming powerful syndicates in many northeastern cities. This book tells the fascinating, first-hand story of how FBI Special Agent Joe Griffin, with the help of a team of courageous professionals, succeeded through dogged determination and uncanny street smarts to convict major La Cosa Nostra leaders in Buffalo, Cleveland, Rochester, and Youngstown.

Forget Hollywood's version of the mafia; this is the real inside story from a man who observed the day-by-day behavior of these "instinctual killers" and for whom "it was a matter of principle to destroy them." FBI Medal of Valor recipient Joe Griffin, with the help of writer/researcher Don DeNevi, provides intimate details of mob intrigue, drug deals, gambling rings, hits, bloody gangland wars, and even a plot to plant a "mole" in the Cleveland FBI office.

All the more fascinating because it's true, Mob Nemesis is an engrossing story of the underworld from a man who took them on and won.

Joe Griffin, after a very successful 30-year career with the FBI, is now president and CEO of Quest Consultants International, a Chicago-area investigative consulting firm.

Don DeNevi is the author, coauthor, or editor of thirty-five books, including Profilers: Leading Investigators Take You Inside the Criminal Mind and Into the Minds of Madmen: How the FBI’s Behavioral Science Unit Revolutionized Crime Investigation (both with John H. Campbell).
Loading...
or
Not Currently Available for Direct Purchase