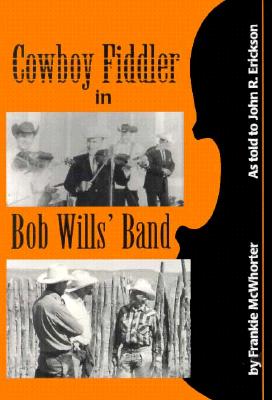 Frankie McWhorter grew up in Bob Wills Country—the Texas Panhandle—and bought his first fiddle with his cowboy wages in 1950. He played with Clyde Chesser and the Texas Village Boys and the Miller Brothers Band before being asked to join Bob Wills and become the 463rd Texas Playboy—a band that had a tremendous impact on the country-western music field. McWhorter tells stories of touring with these bands and of his hours spent listening to Wills tell his stories.

McWhorter, who began cowboying in 1948, also reveals his adventures and misadventures with horses, cattle and other cowboys’ days on the JA Ranch.

Frankie McWhorter grew up in the Texas Panhandle town of Memphis and has managed a seventeen-section ranch in the Panhandle. In addition to fiddling and cowboying, his books include Horse Fixin': Forty Years of Working with Problem Horses , as told to John R. Erickson, and Play It Lazy: The Bob Wills Fiddle Legacy, with Lanny Fiel.

John R. Erickson lives with his wife Kris and their children on their M-Cross Ranch in the Texas Panhandle, “nine-sections of the most gorgeous cowboy country on God's earth,” where he ranches and writes. He is the author of the Hank the Cowdog series.
Loading...
or
Not Currently Available for Direct Purchase