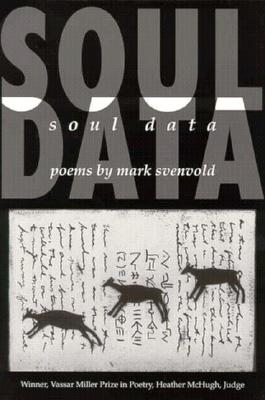 "Soul Data is rarely compounded—of wit and music, surface elegance and intellectual depth, quirk and quandary. Its sensual intelligence is on high alert, and the sheer unsheerness of its language—all its densities and textures—is a linguiphiliacal delight. Unmistakeably American (the poetry’s occasions and its cadences alike serve for signature) it has the jinx-meister’s humors about it. There’s a dark streak, too, an eye for the natural indifferences that border the spotlit human heats. A fine rhetorical savvy, in a mind inclined to the chillier depths: among poetic gifts these days it’s an uncommon conjunction, a gift of mysteries, like the sight (across a night pond’s surface) of bright-blue shooting star: one hopes the other humans get to see it."—Heather McHugh

South of Spokane Street, a gear works
turns its teeth—shadows in a cavern,
through the cycles of a drop-forge piston,
heft themselves and recoil in a dark
rain of sparks, the echo off the blocks—
pa-tang!—arriving late, repeats itself again,
a ceaseless, a remorseless hammering home,
a point made and lost in the patterns of work.
Across the street, a hunkered stretch of houses,
swing sets and cyclone fencing, a clatch of cars.
The agent shrugs—"It’s zoned Residential/
Light Industrial"—pa-tong! A lunatic fringe
of gladiolus fronts the walkways and the rows
of empty rooms we roll by at low idle.

Mark Svenvold, winner of The Nation “Discovery” Award, received his MFA from the University of Iowa Writers’ Workshop. His poems have appeared in a variety of magazines including AGNI, The Atlantic Monthly, The Gettysburg Review, The Nation, Ploughshares, The Virginia Quarterly Review and have been anthologized in Under 35: The New Generation of American Poets. He lives in New York City.
Loading...
or
Not Currently Available for Direct Purchase