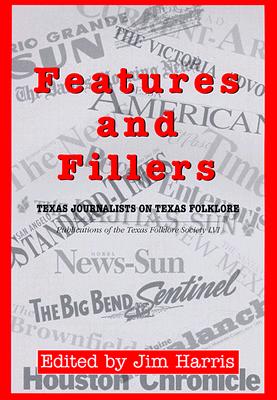 Without the footnote and bibliography baggage of academic writings, these newspaper articles and stories detail the traditions, customs and practices of Texans from El Paso to Longview, from Amarillo to Houston. This is a book about the folk as journalists write about them. Folklorist Jim Harris discovered through writing his own column that newspaper readers were hungry for articles about their past, but they did not want dry historical facts. They wanted lively and personal stories about such topics as the Native Americans who once roamed the plains, settlers who came from the east, the formation of early twentieth-century communities, abandoned school houses, ghost towns, old-fashioned ranch dances, or life in the oil camps.

Any observant reader of newspapers will find examples of traditional life being reported and analyzed in the papers, be they large circulation dailies in metropolitan areas or small papers in rural and isolated regions. Journalists use folklore subjects in a variety of ways: reporting on an upcoming traditional festival; on the creation of a traditional artifact, an individual’s rug or a communal quilt; or profiling a local folk artist or musician.

Jim Harris has taught in colleges in Texas, Louisiana and New Mexico. He has published poetry, fiction and essays and has been a newspaper columnist for five years. Named a New Mexico Eminent Scholar, he teaches at New Mexico Junior College in Hobbs, New Mexico.
Loading...
or
Not Currently Available for Direct Purchase