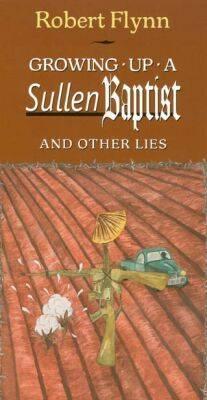 Growing Up a Sullen Baptist and Other Lies

This is an eclectic array of seventeen essays, all of which will evoke a direct and immediate response. Ranging from humorous to satirical, from persuasive to sarcastic, Flynn moves from preaching to the choir to preaching at the choir. Trained as both a Baptist and a Marine, he explores the concepts gleaned from a world that this training did not equip him to control, improve, or escape. Flynn admits he has tried to meld the pretty presumption of the Baptists that “all men are brothers” with the hard presumption of the Marines that “you will attack until I say you are dead.” He calls the result an unholy view of the world in which he lives and survives, alternating between humor and anger.

Robert Flynn, a native of Chillicothe, Texas, is the author of seven novels, among them North To Yesterday, (winner of awards from the Texas Institute of Letters and the National Cowboy Hall of Fame and named one of the Best Books of the Year by the New York Times ) and Wanderer Springs (winner of a Spur Award from Western Writers of America). Most recently, he coauthored with the late Dan Klepper a new novel, The Devils Tiger. He is also the author of a nonfiction narrative, A Personal War in Vietnam. His two story collections are both recipients of awards: Seasonal Rain, co-winner of the Texas Literary Festival Award, and Living with the Hyenas, winner of a Western Heritage Award from the National Cowboy Hall of Fame. He also coauthored When I Was Just Your Age, published by the University of North Texas Press. In 1998, Flynn received the “Distinguished Achievement Award” from the Texas Institute of Letters. Retired as writer-in-residence at Trinity University, he lives in San Antonio with his wife, Jean.
Loading...
or
Not Currently Available for Direct Purchase