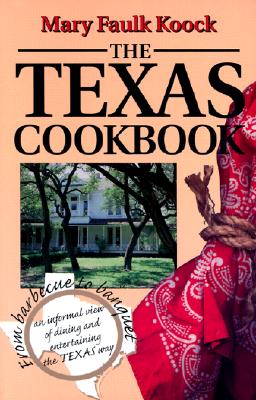 This delightful collection captures the flavor and diversity of the cuisine of the Lone Star State. The Texas Cookbook presents recipes ranging from down-home cooking to high-class affairs, from regional favorites to ethnic specialties. Mary Faulk Koock traveled throughout Texas gathering recipes from ranch kitchens and city hostesses. Scattered among these are the author’s anecdotes from her vast and varied encounters with the famous and influential.

At the home of friends in Dallas Koock reveals the recipe for Chicken Cannelloni served after an opera. We share in her delight with Persimmon Salad in San Antonio, Cold Breast of Duck with Orange Slices in Houston, and Cebollas Rellenas from the Rio Grande Valley. Where else can you learn the story behind Slumgullion, a purported concoction of Fort Worth’s Amon Carter Sr., and friend Will Rogers, or find the recipe for Pepparkakor (Swedish Ginger Cookies) from the Austin area? Other cities with recipes featured are Tyler, Abilene, Rockdale, El Paso, Waco, Columbus, and Corpus Christi. Much more than a cookbook, this collection offers a look at a way of life and entertaining, Texas style.

Hostess, businesswoman, art patron and supporter, Mary Faulk Koock has attracted people from all walks of life to her great style and love of life through over numerous printings of The Texas Cookbook. This remarkable woman transformed her family home into one of country’s most elegant restaurants, Green Pastures. She traveled widely and well, nurturing a community of artists, politicians, musicians and ranchers across the state. Her capacity to create experiences and build friendships with everyone whose path she crossed transformed dinners and receptions from the simple to the sumptuous.

The Texas Cookbook is a portrait of good food and good company. It goes beyond wonderful recipes and invites us to share the hospitality of leading Texans of the 1960s. Here is a Texas we’ll never know again, peopled by larger-than-life personalities and embellished with a lifestyle of grace and fun. Travel across the state and have breakfast with Van Cliburn, lunch at the world-famous King Ranch, the “eighth wonder of the world,” and dinner with Joan Sutherland and Dorothy and Richard Rogers. Join Mary Faulk Koock as she stages lunch for LBJ, Harry Truman, and Sam Rayburn and a post-concert dinner for pianist Leonard Pennario—and see if you don’t have more fun than Martha Stewart could ever imagine.

Praise For The Texas Cookbook: From Barbecue to Banquet—an Informal View of Dining and Entertaining the Texas Way (Great American Cooking Series #1)…

“Hooray! Mary Faulk Koock's book is back by popular demand. Life will be more interesting with her stories and recipes.” --Liz Carpenter, former Press Secretary to Lady Bird Johnson

“Mary Faulk Koock’s Texas Cookbook has been a classic since it was published in 1965.”--Sharon Hudgins, Dallas Morning News

“[A]s exuberant as the state, and full of amusing information and good recipes from every part of it. . [G]reat fun for Texans and non-Texans alike."--New York Times Book Review

“Here is a collection of recipes as varied and interesting as the state from which they come. . . . Most recipes are given as part of a complete menu, and are clear and easy to follow.”--Library Journal

"Mary Faulk Koock's classic The Texas Cookbook was published in 1965 as the definitive resource on Texan cuisine. . . . Famously written with the guidance of the one and only James Beard, Koock's sprawling cookbook divides Texas by geographic region, starting with Austin and spiraling outward from there. . . . In many ways The Texas Cookbook was ahead of its time, offering a more diverse sampling of Texan cuisine that its contemporaries. Koock was dedicated to searching out food beyond the state's famed barbecue and Tex-Mex."--Texas Monthly

Mary Faulk Koock traveled throughout Texas gathering recipes ranging from down-home cooking to high-class affairs, from regional favorites to ethnic specialties. Scattered among these are the author’s anecdotes from her vast and varied encounters with the famous and influential.
Loading...
or
Not Currently Available for Direct Purchase