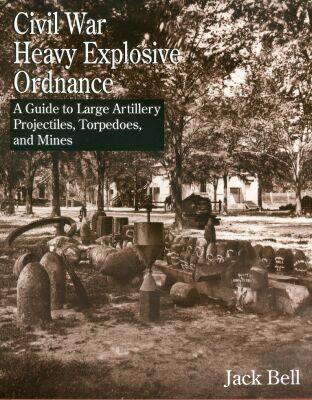 A Guide to Large Artillery Projectiles, Torpedoes, and Mines

Civil War Heavy Explosive Ordnance is the definitive reference book on Union and Confederate large caliber artillery projectiles, torpedoes, and mines. Some of these projectiles are from the most famous battles of the Civil War, such as those at Fort Sumter, Charleston, Vicksburg, Richmond, Fort Pulaski, Fort Fisher, Mobile Bay, Port Hudson, and the Hampton Roads area of Virginia. Others were fired from famous cannon: the “Swamp Angel” of Charleston, the 10-inch Parrott rifles and 12.75 Blakely rifles used in Charleston, “Whistling Dick” of Vicksburg, and the 8-inch British Armstrong rifle and 8-inch Blakely rifle of Fort Fisher. And some are from ships such as the Alabama, Richmond, Pawnee, and Montauk, or were involved in torpedo attacks against major warships.

Jack Bell covers more than 360 projectiles in smoothbore calibers of 32-pounder and up and rifled projectiles of 4-inch caliber and larger. Bell also documents twenty-one Union and Confederate torpedoes and mines, both those from historical records and those that have survived to modern times. Each projectile and torpedo is presented in a data sheet showing multiple views of the specimen and providing data including, but not limited to, diameter, weight, the gun used to fire it, rarity index, and provenance.

Over the years those studying Civil War ordnance have been relying on the out-of-print 1973 publication by Sydney Kerksis and Thomas Dickey, Heavy Artillery Projectiles of the Civil War 1861-1865, which covers less than half the material presented in Bell’s book. Beautifully illustrated with more than 1,000 photos of projectiles from public and private collections, Civil War Heavy Explosive Ordnance is the new standard reference volume and will be of great interest to Civil War historians, museum curators, field archaeologists, private collectors, dealers, and consultants on unexploded ordnance.

Jack Bell began collecting Civil War artillery projectiles at the age of ten, when the legendary Tom Dickey took him hunting for shells near Kennesaw Mountain. He has collected and studied Civil War explosive ordnance since then. After earning degrees in marketing and political science from Northwestern University and a degree in international relations from the University of South Carolina, he went on to serve in the Marine Corps as a captain in Vietnam, Okinawa, and the Caribbean. Over the years, Bell has visited almost every site where major Civil War battles were fought using heavy explosive ordnance. He has photographed collections of the U.S. Navy, U.S. Army, the National Park Service, the Atlanta History Center, the Citadel, the North Carolina Department of Archives at Fort Fisher, and twenty-six private collections. Bell and his wife Virginia live in Menlo Park, California, and Annapolis, Maryland.
Loading...
or
Not Currently Available for Direct Purchase