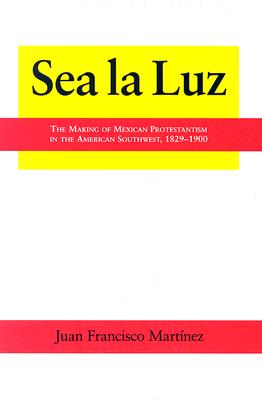 Mexican Protestantism was born in the encounter between Mexican Catholics and Anglo American Protestants, after the United States ventured into the Southwest and wrested territory from Mexico in the early nineteenth century. Sea la Luz tells the story of Mexican converts and the churches they developed through the records of Protestant missionaries.

Juan Francisco Martinez traces Protestant mission work among the Spanish speaking of the Southwest throughout the nineteenth century. By 1900, about 150 Spanish-speaking Protestant churches with more than five thousand adult members existed in the region. They were rejected by their own people because they were Protestants, but Anglo American Protestants did not readily accept them either because they were Mexican. In spite of the pressures from both their own community and the larger society, they forged a new religious identity in the midst of conquest.

“Martinez has rendered an invaluable service to the history of the Southwest.”—Justo L. Gonzalez, Professor of Church History, Emory University

JUAN FRANCISCO MARTINEZ is Assistant Dean for the Hispanic Church Studies Department and Associate Professor of Hispanic Studies and Pastoral Leadership at Fuller Theological Seminary in Pasadena, California.
Loading...
or
Not Currently Available for Direct Purchase