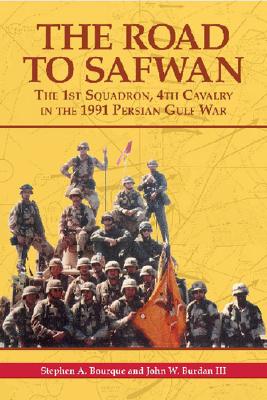 The Road to Safwan

The 1st Squadron, 4th Cavalry in the 1991 Persian Gulf War

The Road to Safwan is a complete history of the 1st Infantry Divisions cavalry unit fighting in Operation Desert Storm. Stephen A. Bourque and John W. Burdan III served in the 1st Infantry Bourque in Division Headquarters, Burdan as the Operations Officer of the 1st Squadron, 4th Cavalry. Based on extensive interviews and primary sources, Bourque and Burdan provide the most in-depth coverage to date of a battalion-level unit in the 1991 war, showing how the unit deployed, went into combat, and adapted to changing circumstances.

The authors describe how the officers and men moved from the routine of cold war training to leading the Big Red One in battle through the Iraqi defenses and against the Iraqi Republican Guard. The 1st Squadron, 4th Cavalry participated in the 1st Brigade attack on G-Day, the large tank battle for Objective Norfolk, the cutting of Basra Road, and the capture of Safwan Airfield, the site where General H. Norman Schwartzkopf conducted cease-fire negotiations with the Iraqis. The squadrons activities are placed squarely within the context of both division and corps activities, which illustrates the fog of war, the chain of command, and the uncertainty of information affecting command decisions.

The Road to Safwan challenges the myth that technology won the 1991 Persian Gulf War. Contrary to popular view, it was a soldier’s war not much different from previous conflicts in its general nature. What was different was the quality and intensity of the unit’s training, which resulted, repeatedly, in successful engagements and objectives secured. It is the story of the people, not the machines, which ultimately led this squadron to the small town of Safwan.

Stephen A. Bourque served with the Big Red One and earned a Bronze Star during Operation Desert Storm. Following his retirement from the army after twenty years enlisted and commissioned service, he obtained his doctorate from Georgia State University, taught at California State University, Northridge, and wrote Jayhawk!: The VII Corps in the Persian Gulf War. Currently he is associate professor of history at the U.S. Army Command and General Staff College. He lives in Kansas City with his wife, Debra.

John W. Burdan III is a retired Army Officer living with his wife, Bridget, in Colorado Springs, Colorado. A West Point graduate, Burdan was commissioned as an armor officer in 1977. He served with the 1st Infantry Division in the Gulf from May 1989 to June 1992, receiving the Bronze Star and Bronze Star with V device for his service during Operations Desert Shield and Desert Storm.
Loading...
or
Not Currently Available for Direct Purchase