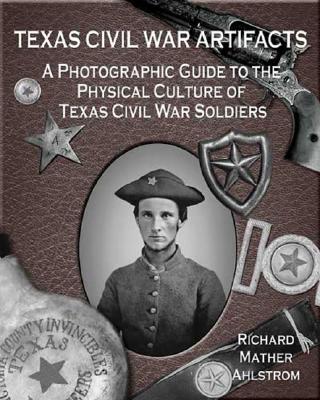 One of the most popular literary subjects worldwide is the American Civil War. In addition to an enormous number of history buffs, there are tens of thousands of collectors of Civil War artifacts. In the last fifty years, several books have been written concerning the equipment associated with soldiers of specific Confederate states, but no book until now has ever chronicled the military equipment used by Texas soldiers. Texas Civil War Artifacts is the first comprehensive guide to the physical culture of Texas Civil War soldiers.

Texas military equipment differs in a number of ways from the equipment produced for the eastern Confederate states. Most of the Texas-produced equipment was blacksmithed, or local-artisan made, and in many cases featured the Lone Star as a symbol of Texas. Contemporary Civil War literature frequently mentions that most soldiers of Texas displayed the Lone Star somewhere on their uniform or equipment.

In this groundbreaking volume, Richard Mather Ahlstrom has photographed and described more than five hundred Texas-related artifacts. He shows the diverse use of the Lone Star on hat pins, waist-belt plates, buckles, horse equipment, side knives, buttons, and canteens. In addition, the weapons that Texans used in the Civil War are featured in chapters on the Tucker Sherrard and Colt pistols; shotguns, rifles, and muskets; and swords. Rounding out the volume are chapters on leather accouterments, uniforms and headgear, and a gallery of Texas soldiers in photographs.

This book will prove to be a valuable reference guide for Civil War collectors, historians, museum curators, re-enactors, and federal and state agencies.

“While there are similar volumes that have examined ‘dug’ artifacts on the national level, so little has been done on Texas that Ahlstrom’s volume constitutes a groundbreaking product. The book offers the viewer an opportunity to see many objects that are so ‘locked-away’ in private hands as to not be available outside the close community of collectors. The chapter on pistols is worth the price of the book by itself!”--Danny Sessums, Director of the University Museums, Houston Baptist University

“Texas units served in nearly every state and every major battle of the Army of Northern Virginia and the Army of the Tennessee, and their artifacts were widely dispersed from New Mexico to Pennsylvania. Texas Civil War Artifacts will be the primary reference used in identifying these objects throughout the country. Ahlstrom has been careful to include only those items with Texas Confederate provenance.”--Buddy D. Patterson, retired director of the Texas Heritage Museum and Confederate Research Library at Hill College

“The Lone Star has always embodied everything Texans love most about Texas: our fierce independence, our love of liberty and our heritage of fighting to let Texans run Texas. Richard Ahlstrom’s wonderful book reveals many completely unknown Texas military relics for the first time alongside the better known buckles and buttons. These fascinating traces left behind by our ancestors show how proud we have always been of our Lone Star. As a collector of Texas hat stars, I am especially pleased with this chapter. Ahlstrom has filled a void in Texas history with a skill and breadth that will benefit historians, collectors and all of us who love Texas for many years to come.”--U.S. CongressmanJohn Culberson, Texas

"Author Ahlstrom has assembled a unique selection of known Texas Civil War and Lone Star artifacts which are detailed in 14 chapters. They include Lone Star insignia, Texas-made firearms and edged weapons, uniforms and headgear, buttons, and a nice selection of photos of Texas soldiers. . . . Ahlstrom is to be commended for assembling this vast amount of Texas-related materiel."--Civil War News

"The 333 figures (photographs) in this slick paper volume are generally sharp and clear and large enough to easily identify the attributes of most artifacts. The captions that accompany them are well done--usually giving provenance, type(name/description), dimensions, construction, remarks, and, as appropriate, cross-references where that artifacts or closely related artifacts can be found."--Kansas Anthropologist

"Many historians are poorly disguised antiquarians, and few of them can resist at least a quick peek at displays of relics from the periods they study. This book combines material from both worlds: excellent photographs of a diverse array of artifacts accompanied by a solid text that provides not just the provenances of the items, but information on how the objects were made and biographical snippets about those who used them, if known. . . . The result is a hefty volume that will assist scholars and collectors in exploring the material culture of Texas soldiers in the Civil War, while it will also be useful for re-enactors who want authenticity in the gear they assemble."--Military History of the West

Richard Mather Ahlstrom has lived in Texas since 1979. He graduated with an AB degree from Harvard University and completed the Executive Program of Amos Tuck School of Business Administration at Dartmouth College. He is retired from Diamond Shamrock Corporation, where he was a Senior Vice President and Chief Financial Officer. He has previously written a book on prehistoric American Indian pipes. Long interested in the Civil War and Texas soldiers, Ahlstrom has amassed a personal collection of Texas Civil War artifacts.
Loading...
or
Not Currently Available for Direct Purchase