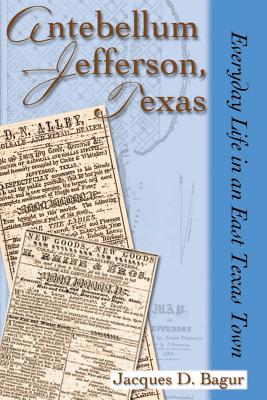 Founded in 1845 as a steamboat port at the entryway to western markets from the Red River, Jefferson was a thriving center of trade until the steamboat traffic dried up in the 1870s. During its heyday, the town monopolized the shipping of cotton from all points west for 150 miles. Jefferson was the unofficial capital of East Texas, but it was also typical of boom towns in general.

For this topical examination of a frontier town, Bagur draws from many government documents, but also from newspaper ads and plats. These sources provide intimate details of the lives of the early citizens of Jefferson, Texas. Their story is of interest to both local and state historians as well as to the many readers interested in capturing the flavor of life in old-time East Texas.

“Astoundingly complete and a model for local history research, with appeal far beyond readers who have specific interests in Jefferson.”—Fred Tarpley, author of Jefferson: Riverport to the Southwest

“This will be ‘the book of record’ for antebellum Jefferson. No work in the past comes close to the massive detail in this study.”—James Smallwood, emeritus professor of history, Oklahoma State University

"This study is an outgrowth of A History of Navigation on Cypress Bayou and the Lakes, which covers all the ports and landings on that navigation route. It draws on US censuses, city records, county tax rolls, deed records, district court minutes, and other primary sources to discuss such matters as women, slaves, primary business types, fraternal organizations, postal services, balls and dances, and vice."--Reference and Research Book News

"While the largest audience for Antebellum Jefferson will probably be local, students of western boom town development and Texas history in general should find the volume of significant use in their research."--Civil War Books and Authors

"Bagur conclusively demonstrates the former status that the town had in East Texas and brilliantly conveys the heart of the town as being focused on the improvement of the lives of its citizens. . . . [I]t should also serve as a template for those who seek to write a successful and engaging town history."--Southwestern Historical Quarterly


"The author highlights the human element through extensive use of personal records, such as deed records and newspapers, in very useful chapters on such varied subjects as vice, health and medicine, crime, culture and entertainment, sports, and mortality that this reviewer found quite interesting and informative. . . . Antebellum Jefferson instantly becomes a source of reference and thus deserves a place in the library of any student of antebellum Texas history."--The Historian

"Those seeking information about ancestors who lived in the area will find the history of the area interesting and helpful."--Review of Texas Books

Jacques D. Bagur is an independent researcher specializing in the history and geography of Louisiana and East Texas. He holds a degree from LSU and has spent more than thirty years in applied public policy research. The author of UNT Press’s A History of Navigation on Cypress Bayou and the Lakes, he lives in Baton Rouge, Louisiana.