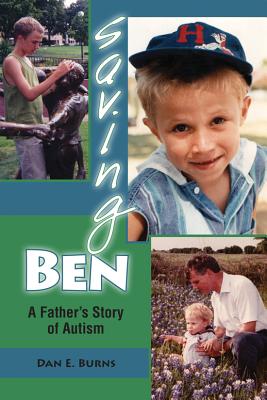 Each year thousands of children are diagnosed with autism, a devastating neurological disorder that profoundly affects a person’s language and social development. Saving Ben is the story of one family coping with autism, told from the viewpoint of a father struggling to understand his son’s strange behavior and rescue him from a downward spiral.


“Take him home, love him, and save your money for his institutionalization when he turns twenty-one.” That was the best advice his doctor could offer in 1990 when three-year-old Ben was diagnosed with autism. Saving Ben tells the story of Ben’s regression as an infant into the world of autism and his journey toward recovery as a young adult. His father, Dan Burns, puts the reader in the passenger’s seat as he struggles with medical service providers, the school system, extended family, and his own limitations in his efforts to pull Ben out of his darkening world.


Ben, now 21 years old, is a work in progress. The full force and fury of the autism storm have passed. Using new biomedical treatments, repair work is underway. Saving Ben is a story of Ben’s journey toward recovery, and a family’s story of loss, grief, and healing. “Keep the faith, never give up.” These are the lessons of the author’s miraculous journey, saving Ben.

“Saving Ben is a haunting tale, so powerfully told that readers will find it practically crawls under their skin as they flip the pages.”—George Getschow, writer-in-residence of the Mayborn Conference, University of North Texas

"Saving Ben is a wonderful read that will make parents look at their own children, disabled or not, and find so much to cherish.” J. N. -  PEOPLE Magazine, September 14, 2009

"Saving Ben is a haunting tale, so powerfully told that readers will find it practically crawls under their skin as they flip the pages."—George Getschow, writer-in-residence of the Mayborn Conference, University of North Texas
— George Getschow

DAN E. BURNS, Ph.D., graduated from Oklahoma State University in 1979 and taught English at Southern Methodist University, University of Texas at Arlington, and University of Phoenix, publishing in numerous scholarly journals. In 1990 his third child, Benjamin, was diagnosed with autism. Dan helped organize a Dallas chapter of Families for Early Autism Treatment, a support group for parents, and pioneered educational and medical interventions. He lives in Dallas, Texas.