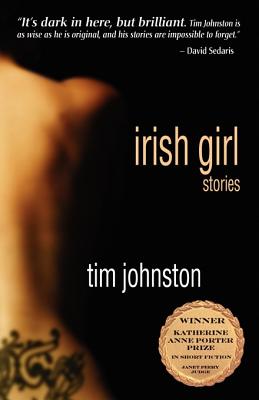 Winner of the Katherine Anne Porter Prize in Short Fiction, 2009

Inside Tim Johnston's Irish Girl (winner of the Katherine Anne Porter Prize in Short Fiction) readers will find spellbinding stories of loss, absence, and the devastating effects of chance—of what happens when the unthinkable bad luck of other people, of other towns, becomes our bad luck, our town. Taut, lucid, and engrossing, provocative and dark—and often darkly funny—these stories have much to offer the lover of literary  fiction as well as the reader who just loves a great story.

“It's dark in here, but brilliant. Tim Johnston is as wise as he is original, and his stories are impossible to forget.”—David Sedaris, award-winning author of Barrel Fever, Naked, Holidays on Ice, Me Talk Pretty One Day, Dress Your Family in Corduroy and Denim, and When You Are Engulfed in Flames

"You have to read closely so as not to miss significant clues in these tightly coiled stories by Katherine Anne Porter Prize–winner Johnston (Never So Green), who ventures deeply into the consciousness of Midwesterners to unearth old tensions and buried animosities. These beautifully rendered tales deliver an emotional wallop."—Publisher's Weekly

"This is white-knuckle prose; it means what it says and it says what it means. Not that I count words, but when an image can be etched in fewer than ten, I sit up and take notice. When an image is limned in fewer than five words, I pretty near shiver. The stories in Irish Girl provide more shiver per page than most stories provide in twenty."—Janet Peery, judge and author of The River Beyond the World

"Tim Johnston’s fine collection of short stories say much by leaving much unsaid. The stories focus on family, neighborhood, and the presence of evil, sometimes in unexpected places. Dialogue is spare but effective, helping to create the characters. Johnston writes frequently about buried emotion that refuses to stay buried. Moments of beauty shine through."—Dallas Morning News

"Bold, exact, and unflinching, Tim Johnston's second book-length release is a display of adept, agile storytelling. The book omits superfluously clever quirks and turns-of-phrase to foster a density of image and psyche. Reader's will be eager to hear what’s coming next from Johnston."—Foreword

"The material here may be dark, but the stories are psychologically astute and emotionally powerful. They are densely layered—mixing multiple story lines in the past and present—but so masterfully intertwined, with one strand conjuring the others, that we never become tangled in the narrative. Instead, we are pulled through the story, eager to see how the disparate pieces will click together, which they always do, often with a surprising little jolt." —Colorado Review

TIM JOHNSTON was born in Iowa City, Iowa. When his first novel, Never So Green, was published, he was working as a carpenter in Hollywood, California. His fiction has been included in the O. Henry Prize Stories and David Sedaris’ anthology of favorites, Children Playing Before a Statue of Hercules. Awarded a MacDowell Fellowship in 2008, Tim is currently back in Iowa City, writing a new novel.
or
Not Currently Available for Direct Purchase