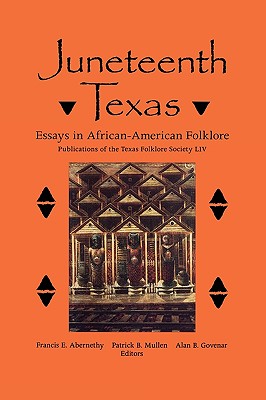 Juneteenth Texas explores African-American folkways and traditions from both African-American and white perspectives. Included are descriptions and classifications of different aspects of African-American folk culture in Texas; explorations of songs and stories and specific performers such as Lightnin’ Hopkins, Manse Lipscomb, and Bongo Joe; and a section giving resources for the further study of African Americans in Texas.

FRANCIS EDWARD ABERNETHY was Regents Professor Emeritus of English at Stephen F. Austin State University, the executive secretary and editor of the Texas Folklore Society, the curator of exhibits for the East Texas Historical Association, and a member of the Texas Institute of Letters. PATRICK B. MULLEN is professor of English at Ohio State University. ALAN GOVENAR is president of Documentary Arts and a writer, folklorist, photographer, and filmmaker.