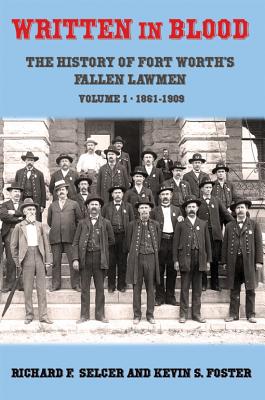 “Another line of duty death” is a chilling headline that serves as an obituary for too many “first responders.” In 2002 Fort Worth joined the ranks of other communities across the nation in building a memorial to its fallen heroes, an elaborate, million-dollar Police and Firefighters Memorial, dedicated in 2009, that recognized fifty-eight policemen going back to the city’s beginnings. Written in Blood is a more inclusive version of that idea because it covers more than just members of the Police Department; it is about the men from all branches of local law enforcement who died defending law and order in the early years: policemen, sheriffs, constables, “special officers,” and even a police commissioner. All were larger-than-life characters who took an oath to “preserve and protect” and therefore deserve to be remembered.

Richard F. Selcer and Kevin S. Foster tell the stories of thirteen of those early lawmen, starting with Tarrant County Sheriff John B. York in 1861 and going through Fort Worth Police Officer William “Ad” Campbell in 1909. York died in a street fight; Campbell was shot-gunned in the back while walking his beat in Hell’s Half-Acre. This is also the story of law enforcement in the days when an assortment of policemen and marshals, sheriffs and deputies, and special officers and constables held the line and sometimes crossed over it.

Co-authors Selcer and Foster bring academic credentials and “street cred” to the story, explaining how policemen got (and kept) their jobs, what “special officers” were, and the working relationship between the city marshal’s boys and the sheriff’s boys. The book is also a primer on court proceedings in the old days as it follows accused cop killers through the justice system. In some instances, the court cases were as fantastic as the crime itself. Each victim’s and perpetrator’s story is fleshed out with the details of his life, ultimate fate, and in some cases his descendants.

Written in Blood is not a paean to these thirteen men. They were not saints; they were real flesh-and-blood men: violent, sometimes racist, often carrying a chip on their shoulder. Most of them would not meet the strict professional standards required of officers today. None of the thirteen has ever had their full story told before now. They were men on the front lines of law enforcement at a time when the job did not come with health insurance or a retirement package. Selcer and Foster show the real men behind the badges, warts and all, leaving it to the reader to judge each officer’s place in history.

“This interesting and well researched book investigates an intriguing and overlooked phase of early Fort Worth history, the deaths of lawmen such as the police, marshals, and sheriffs. Each has a story to tell, and the authors have told it well. The book reads almost like a novel. Written in Blood will be of significant interest especially to the law enforcement community and no doubt to others who just appreciate Fort Worth history.”—J’Nell Pate, author of Livestock Legacy: The Fort Worth Stockyards, 1887-1987

“Written in Blood is quite detailed in its account of the histories and personal lives of the law officers involved and the persons accused of gunning them down, as well as the ensuing trials. Any reader interested in this subject would savor this wealth of detail.”—Robert K. DeArment, author of Bat Masterson and Alias Frank Canton

"This compelling story of thirteen fallen Forth Worth lawmen is so good calling it excellent is almost an insult. It is a superb blend of research, factual history, and storytelling. . . . All of these fallen lawmen have their blood-spattered and tragic stories explained in full, exciting detail."--Wild West History Journal

"Written in Blood is thirteen well told stories, each 20-25 pages long, that does not deal with just the shootings, but looks at the times, conditions, and people associated with them. It tells of the capture, trial, and executions, if they occurred, of the killers, and what happened afterwards. It is an enjoyable, readable book."--Journal of the West

"The tales here are as exhaustively researched and as gritty as a 'Dirty Harry' movie. . . . This book is recommended, both as a tell-it-like-it-is law enforcement history and as a research tool on the shelf. Like other North Texas Press books, this is a definite keeper."--Denver Westerners Roundup

"On the whole, the authors present an engaging example of how to breathe life into a narrative inspired by death."--Southwestern Historical Quarterly

"[T]his enjoyable and captivating book fills a glaring deficiency in our public memory. The narratives capture the nature of the 'true crime' genre while still resutling in a well-researched work of history."--New Mexico Historical Review