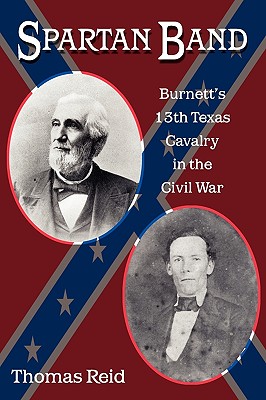 In Spartan Band (coined from a chaplain’s eulogistic poem) author Thomas Reid traces the Civil War history of the 13th Texas Cavalry, a unit drawn from eleven counties in East Texas. The cavalry regiment organized in the spring of 1862 but was ordered to dismount once in Arkansas. The regiment gradually evolved into a tough, well-trained unit during action at Lake Providence, Fort De Russy, Mansfield, Pleasant Hill, and Jenkins' Ferry, as part of Maj. Gen. John G. Walker's Texas division in the Trans-Mississippi Department.

Reid researched letters, documents, and diaries gleaned from more than one hundred descendants of the soldiers, answering many questions relating to their experiences and final resting places. He also includes detailed information on battle casualty figures, equipment issued to each company, slave ownership, wealth of officers, deaths due to disease, and the effects of conscription on the regiment’s composition.

THOMAS REID teaches history at Lamar University, where he received his Master of Arts degree. Formerly an employee of the Department of the Army, he served six years on active duty and sixteen in the Army Reserve. He lives in Woodville, Texas.
Loading...
or support indie stores by buying on