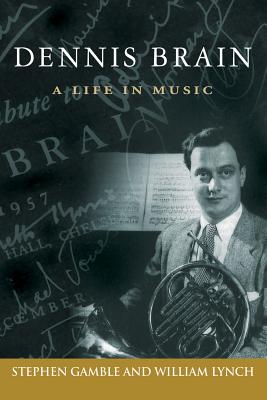 A Life in Music (North Texas Lives of Musician Series #7)

The British horn player Dennis Brain (1921–1957) is commonly described by such statements as “the greatest horn player of the 20th Century,” "a genius,” and "a legend." He was both a prodigy and popularizer, famously performing a concerto on a garden hose in perfect pitch. On his usual concert instrument his tone was of unsurpassed beauty and clarity, complemented by a flawless technique. The recordings he made with Herbert von Karajan of Mozart’s horn concerti are considered the definitive interpretations. Brain enlisted in the English armed forces  during World War II for seven years, joining the National Symphony Orchestra in wartime in 1942. After the war he filled the principal horn positions in both the Philharmonia and Royal Philharmonic Orchestras. He later formed his own wind quintet and began conducting. Composers including Benjamin Britten and Paul Hindemith lined up to write music for him. Even fifty years after his tragic death at the age of 36 in an auto accident in 1957, Peter Maxwell Davies was commissioned to write a piece in his honor.
Stephen Gamble and William Lynch have conducted numerous interviews with family, friends, and colleagues and uncovered information in the BBC archives and other lesser known sources about recordings that were previously unknown. This volume describes Brain’s life and analyzes in depth his musical career. Its appendices of information on performances will appeal to music historians, and its details on Brain’s instruments and equipment will be useful to horn players.

“A pleasure to read: serious but personable, unaffected, unpretentious—conversational in tone. The character of the prose can be said to reflect the character of the book’s subject. Eminently satisfying.”--Robert Marshall, author of Dennis Brain on Record

“Since a great deal of new material has been found by the authors, it is exciting for horn players to anticipate the publication of this book.”--William Scharnberg, Regents Professor of Horn, University of North Texas

"Brain had a huge impact on horn playing and the perception of the horn as a solo instrument in the mid-20th century, and his tragic death at age 36 moved him immediately to icon status. . . . This book should be required reading for all hornists to understand the importance of Brain to our craft. Our heroes deserve at least this much, and this excellent book shows better than any other the depth and breadth of his impact on the musical world."--The Horn Call

"Even though the primary audience for this new biography is clearly horn players--both professional and amateur--it will also appeal to many classical music lovers and record colectors."--Cornucopia, a Publication of the New England Horn Society

"Composers such as Gordon Jacob, Malcolm Arnold, Matyas Seiber, York Bowen, Humphrey Searle, Benjamin Britten, and Paul Hindemith are some of the list of Brain admirers, writing horn concertos and chamber music for him. Francis Poulenc wrote 'Elegie" in memory of Dennis Brain. . . . This biography is an absolute must-read for anyone who loves the french horn."--Uijlenspieghel

STEPHEN GAMBLE and WILLIAM LYNCH are both independent researchers who have been fascinated with Dennis Brain for decades. Lynch, an amateur horn player himself, is a semi-retired aerospace corporation executive with four U.S. patents to his name. Stephen Gamble is a British artist who started playing the horn in 2003.