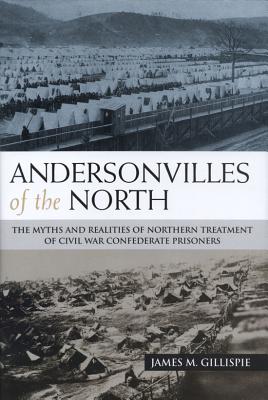 Soon after the close of military operations in the American Civil War, another war began over how it would be remembered by future generations. The prisoner-of-war issue has figured prominently in Northern and Southern writing about the conflict. Northerners used tales of Andersonville to demonize the Confederacy, while Southerners vilified Northern prison policies to show the depths to which Yankees had sunk to attain victory.

Over the years the postwar Northern portrayal of Andersonville as fiendishly designed to kill prisoners in mass quantities has largely been dismissed. The Lost Cause characterization of Union prison policies as criminally negligent and inhumane, however, has shown remarkable durability. Northern officials have been portrayed as turning their military prisons into concentration camps where Southern prisoners were poorly fed, clothed, and sheltered, resulting in inexcusably high numbers of deaths.

Andersonvilles of the North, by James M. Gillispie, represents the first broad study to argue that the image of Union prison officials as negligent and cruel to Confederate prisoners is severely flawed. This study is not an attempt to “whitewash” Union prison policies or make light of Confederate prisoner mortality. But once the careful reader disregards unreliable postwar polemics, and focuses exclusively on the more reliable wartime records and documents from both Northern and Southern sources, then a much different, less negative, picture of Northern prison life emerges. While life in Northern prisons was difficult and potentially deadly, no evidence exists of a conspiracy to neglect or mistreat Southern captives. Confederate prisoners’ suffering and death were due to a number of factors, but it would seem that Yankee apathy and malice were rarely among them.

In fact, likely the most significant single factor in Confederate (and all) prisoner mortality during the Civil War was the halting of the prisoner exchange cartel in the late spring of 1863. Though Northern officials have long been condemned for coldly calculating that doing so aided their war effort, the evidence convincingly suggests that the South’s staunch refusal to exchange black Union prisoners was actually the key sticking point in negotiations to resume exchanges from mid-1863 to 1865.

Ultimately Gillispie concludes that Northern prisoner-of-war policies were far more humane and reasonable than generally depicted. His careful analysis will be welcomed by historians of the Civil War, the South, and of American history.

Praise For Andersonvilles of the North: The Myths and Realities of Northern Treatment of Civil War Confederate Prisoners…

“This is one of the few studies to look at conditions in Northern prisons through the lens of the most objective perspective possible for this emotionally charged subject. Gillispie provides an important revision and clarification of our knowledge about Civil War prisons.” --James M. McPherson, author of Battle Cry of Freedom
— >

“Andersonvilles of the North is an outstanding work of Civil War history. With superb research and penetrating analysis Gillispie has re-written an entire chapter of our received ‘knowledge’ of the conflict. This much-needed book should be read by every student of the Civil War.” --Steven E. Woodworth, author of Jefferson Davis and His Generals
— >

“Gillispie’s most compelling evidence in disputing the retaliatory claim comes from his extensive and resourceful statistical analysis of the diseases treated, deaths by disease, and the recovery rates from disease at the nine camps. . . . Gillispie’s revisionist positions should stimulate much-needed debate regarding all aspects of Civil War prison history.”—Journal of Southern History

“Gillispie takes pains to show that there was no retaliation against inmates and that poor conditions, such as dirty quarters or scant rations, were systematically addressed and improved. . . . [A]n important addition to our understanding of the prisoner-of-war issue.”—North Carolina Historical Review

“Primitive medical treatment and mortality were the norms. Such were, as the author says in this outstanding study, the horrors and misfortunes of the American Civil War.”—Journal of Military History

“Gillispie’s argument is both cogent and significant, and it seems likely that Andersonvilles of the North will become a major work in the field of Civil War prisons for years to come.”—Journal of Illinois History

“A host of Confederate veterans’ statements tend to link with and support official reports by Federal prison officials and inspectors, as Gillispie points out convincingly.”—Georgia Historical Quarterly

James M. Gillispie earned a Ph.D. in American History from the University of Mississippi. He has published articles and numerous reviews on Civil War prison scholarship and has spoken at the Museum of the Confederacy on the era’s military prisons. Gillispie is Dean of Humanities & Social Sciences and Professor of History at Lord Fairfax Community College. He lives in Stephen’s City, Virginia.