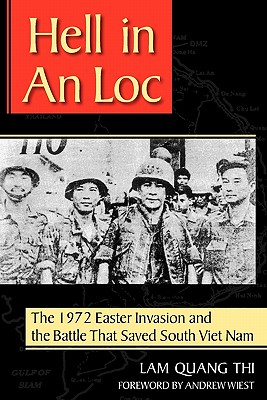 Hell in An Loc

The title to this book is borrowed in part from the article “The Battle That Saved Saigon”by Philip C. Clarke (Reader’s Digest, March 1973). Its introduction reads: “Three days before Easter last spring, the North Vietnamese struck South Vietnam with a fury unknown to the Vietnam war since the Tet offensive four years earlier. They poured south across the DMZ, smashed into the central highland from Laos, crossed the border from Cambodia and, with an army of 36,000 men and 100 Russian-made tanks, raced toward Saigon, boasting that they’d be in the city by May 19, Ho Chi Minh’s birthday. From one end of the country to the other, bases and villages fell before the savagery of their onslaught. By April 5, all that blocked them from Saigon was a ragtag band of 6,800 South Vietnamese regulars and militiamen and a handful of American advisors holed up in An Loc, a once-prosperous rubber-plantation town of 15,000 astride Highway 13, which led to the capital, 60 miles to the south.”

An Loc, indeed, had become the symbol of the determination of the South Vietnamese Army (ARVN) and its people to stand at all costs in face of the enemy. A depleted army, outnumbered and outgunned, stood its ground and fought to the end and succeeded. Against all expectations, the ARVN beat back furious assaults from three NVA divisions, supported by artillery and armored regiments, during three months of savage fighting. Yet this victory in 1972 was largely unreported in the U.S. media, which had effectively lost interest in the war after the disengagement of U.S. forces following the Vietnamization of the conflict.

In Thi’s opinion, reporting the victory of An Loc would contradict the U.S. media’s basic premise that the war could not be won because ARVN was a corrupt and ineffective force. Subsequent published studies of the conflict provide a wealth of details about the use of U.S. airpower and the role of the U.S. advisors, but they fail to provide equal coverage to the activities and performance of ARVN units participating in the siege.

Thi believes that it is time to set the record straight. Without denying the tremendous contribution of the U.S. advisors and pilots to the success of An Loc, this book is written primarily to tell the South Vietnamese side of the story and, more importantly, to render justice to the South Vietnamese soldier who withstood ninety-four days of horror and prevailed.


Praise For Hell in An Loc: The 1972 Easter Invasion and the Battle That Saved South Viet Nam…

In examining the ARVN's greatest victory in this meticulously researched and well written book, Thi's primary purpose was to restore the reputation of the ARVN as a competent fighting force, and in that goal he largely succeeds."--Military History of the West

“Thi’s book is a unique work, written by a participant in the war, from a fresh historical vantage point, utilizing new evidence. Hell in An Loc will be a powerful addition to the historiography of the Vietnam conflict.”—Andrew Wiest, author of Vietnam’s Forgotten Army: Heroism and Betrayal in the ARVN

“General Thi has brought his unique perspective as a Vietnamese citizen and as a South Vietnamese officer to an important battle of the Vietnam War. The value of this book is its operational detail about the South Vietnamese, which surpasses any of the accounts in print up to this point.”—Dale Andrade, author of America’s Last Vietnam Battle

“General Lam Quang Thi’s long overdue second book provides crucial missing perspectives from America’s longest allies on the battlefield, those from South Vietnam. Perhaps more importantly, his work documents the South Vietnamese military’s valiant efforts in the largest battle of the Vietnam War, which have been omitted by the American media, military, and in the movies.”—Quang X. Pham, author of A Sense of Duty: My Father, My American Journey

“A meticulous account created specifically to set the historical record straight, Hell in An Loc is highly recommended.”—Midwest Book Review

LAM QUANG THI was a general in the ARVN. He is the author of The Twenty-five Year Century: A South Vietnamese General Remembers the Indochina War to the Fall of Saigon (UNT Press). He lives in Fremont, California. ANDREW WIEST (foreword) is the author of Vietnam’s Forgotten Army: Heroism and Betrayal in the ARVN.