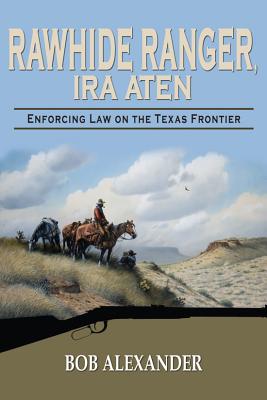 Enforcing Law on the Texas Frontier (Frances B. Vick Series #8)

Winner of the Best Book Award from the Wild West History Association, 2012.

Ira Aten (1862-1953) was the epitome of a frontier lawman. When as a youth he heard of the killing by Rangers of the notorious outlaw Sam Bass at Round Rock, Aten’s neighborhood, he altered his plans of being a cowboy and instead set his sights on becoming a Texas Ranger. At age twenty he enrolled in Company D during the transition of the Rangers from Indian fighters to topnotch peace officers. This unit—and Aten—would have a lively time making their mark in nineteenth-century Texas.

The preponderance of Texas Ranger treatments center on the outfit as an institution or spotlight the narratives of specific captains. Bob Alexander aptly demonstrated in Winchester Warriors: Texas Rangers of Company D, 1874-1901 that there is merit in probing the lives of everyday working Rangers. Aten is an ideal example. The years Ira spent as a Ranger are jam-packed with adventure, border troubles, shoot-outs, solving major crimes—a quadruple homicide—and manhunts. Aten’s role in these and epochal Texas events such as the racially insensitive Jaybird/Woodpecker Feud and the bloody Fence Cutting Wars earned Ira’s spot in the Ranger Hall of Fame.

His law enforcing deeds transcend days with the Rangers. Ira served two counties as sheriff, terms spiked with excitement. Afterward, for ten years on the XIT, he was tasked with clearing the ranch’s Escarbada Division of cattle thieves. Aten’s story spins on an axis of spine-tingling Texas history. Moving to California, Ira was active in transforming the Imperial Valley from raw desert into an agricultural oasis. Unmistakably he was public spirited and committed to community betterment.

Relying on primary source documents to build a platform for this meticulously researched and comprehensive biography with 1000 endnotes and 100 remarkable old-time photographs, Alexander gives us Ira Aten in the round—evenhandedly—the true story of a Ranger tough as rawhide.

“Alexander has a decided advantage in dealing with lawmen, considering his professional career. He has uncovered a wealth of information from both standard and arcane sources. Rawhide Ranger is an exceptional book by an exceptional historian and storyteller.”—David Johnson, author of John Ringo and The Mason County “Hoo Doo” War, 1874-1902

“Never shirking from any duty, any showdown, nor the trail of any fugitive, Ira Aten figured into literally dozens of stories—true stories—that shaped and molded the Texas Rangers in the late 1800s. . . . Bob Alexander is a terrific storyteller who also knows how to do good history.”—Paul Spellman, author of Captain J. A. Brooks, Texas Ranger and Captain John H. Rogers, Texas Ranger

“Bob Alexander has done it again! With his background as a career police officer, Bob has crafted the biography of noted Texas Ranger Ira Aten with insight and with his customary colorful and lively prose.”—Bill Neal, author of Vengeance Is Mine: The Scandalous Love Triangle That Triggered the Boyce-Sneed Feud

“Bob Alexander is the most indefatigable researcher I have ever known. He finds documents no one knew existed. Most importantly, he knows what they mean, which makes him one helluva Western historian.”—Louis R. Sadler, co-author of The Texas Rangers and the Mexican Revolution

"In his interesting biography on Iran Aten, Bob Alexander meticulously re-creates the career of the Texas Ranger from his enlistment in the Frontier Battalion to his post-Ranger days as a sheriff and rancher. The excellence of the author's research is indicated by plentiful endnotes."--True West

"For the Texana collector a copy is mandatory. [Rawhide Ranger] is a 'must read' for Texas Ranger enthusiasts. Practically anyone with as much as a fleeting interest in old west lawmen and outlaws should read Rawhide Ranger."--Wild West History Association Journal

"Alexander can write like a scholarly researcher, yet he still has the ability to appeal to the common folk. . . . In the words of the author: 'Ira Aten was a man of genuine gunfighting ability.' . . . The Ranger showed this knack for handling his weapons in shootouts with fence cutters, in the killing of Wes Collier, and in his courageous stand in the Jaybird-Woodpecker feud."--Southwestern Historical Quarterly

"Especially noteworthy is the author's examination of the overlapping legal jurisdictions that severely complicated the duties of Texas law enforcement officers. Aten sometimes found himself facing down local sheriffs, constables, and marshals when he tried to make arrests. . . . Author Bob Alexander, a career lawman himself, has written not only the definitive biography of Ira Aten but also a credible history of the Texas Rangers during the late nineteenth century."--Journal of Southern History

BOB ALEXANDER began a policing career in 1965 and retired as a special agent with the U.S. Treasury Department. He is the author of Winchester Warriors: Texas Rangers of Company D, 1874-1901; Fearless Dave Allison, Border Lawman; Desert Desperadoes: The Banditti of Southwestern New Mexico; and Lawmen, Outlaws, and SOBs. He lives in Maypearl, Texas.
Loading...
or
Not Currently Available for Direct Purchase