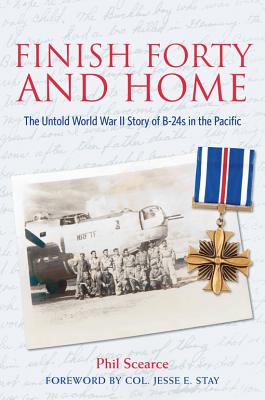 A Main Selection of the Military/History Book Club.
During the early years of World War II in the Pacific theatre, against overwhelming odds, young American airmen flew the longest and most perilous bombing missions of the war. They faced determined Japanese fighters without fighter escort, relentless anti-aircraft fire with no deviations from target, and thousands of miles of over-water flying with no alternative landing sites.
Finish Forty and Home, by Phil Scearce, is the true story of the men and missions of the 11th Bombardment Group as it fought alone and unheralded in the South Central Pacific, while America had its eyes on the war in Europe. The book opens with Sgt. Herman Scearce, the author's father, lying about his age to join the Army Air Corps at 16. The narrative follows Scearce through training and into combat with his new crewmates, including pilot Lt. Joe Deasy, whose last-minute transfer from training duty thrusts the new crew into the squadron commander’s role.
After bombing Nauru, the squadron moves on to bomb Wake Island, Tarawa, and finally Iwo Jima. These missions bring American forces closer and closer to the Japanese home islands and precede the critical American invasions of Tarawa and Iwo Jima. The 42nd Squadron’s losses through 1943 were staggering: 50 out of 110 airmen killed.
Phil Scearce explores the context of the war and sets the stage for these daring missions, revealing the motivations of the men who flew them: to finish forty combat missions and make it home again. He based his story upon substantial research at the Air Force Historical Research Agency and the National Archives, interviews with surviving airmen, and interviews and correspondence with the survivors of men who were lost. His is the first book to document America's bomber offensive in the early days of the Pacific War.

“Phil Scearce’s Finish Forty and Home is a triumph of intimate history, following the author’s seventeen-year-old airman father as he goes to war in a forgotten but fiercely contested corner of World War II. Through meticulous research and lyrical prose, Scearce captures the grim grind of the Pacific war, life and death in a battered bomb squadron, and the tumultuous experiences of a B-24 radioman and his crew. Finish Forty and Home is a treasure: poignant, thrilling, and illuminating.”—Laura Hillenbrand, best-selling author of Unbroken and Seabiscuit

“This book will help those who wish to gain a real insight to the personal and human aspects of the air war over the Pacific. Sgt. Scearce's story will surprise no one who was there, and everyone who was not.”—Dr. James A. Mowbray, Professor of Strategy, Doctrine, and Airpower, Air War College, Maxwell Air Force Base

“Scearce does a very good job of depicting the helter skelter of air combat or the sometimes prolonged fight to keep an aircraft in flight. The thing that comes across most clearly—a point essential to understanding the experience of fighting in World War II—is that the war was not a series of battles (they were highpoints) but an endless process of violence that extracted physical and psychological damage like a kind of water torture. There were so many different ways to die. Consequently, life was cheap.”—Eric M. Bergerud, author of Fire in the Sky: The Air War in the South Pacific and Touched with Fire: The Land War in the South Pacific

“This history brings back memories of the dear friends who gave their lives in this war and is a tribute to them and to all those, like Sergeant Herman Scearce, who laid their lives on the line and were blessed to survive. It is a comfort to know that this record has been written in remembrance of these patriots and of this part of our war in the Pacific.”—Colonel Jesse E. Stay, U.S. Air Force (ret)

"Finish Forty and Home draws upon exhaustive research to bring both the rigors of the mission and the deadly shock of battle to life. Highly recommended."--The Midwest Book Review

"[D]uring the early stages of the air campaign, completing forty missions was virtually an impossible task, and it was not until later when improvements in equipment coupled with the allied advance provided crews the opportunity to do so. . . . Scearce's book is a salute to his father's service and an excellent tribute to those with whom he served. The reader will find the book difficult to put down and lament finishing it once completed."--Johannes R. Allert, H-WAR/H-NET Reviews

"This is the rare volume filling in a glaring gap in American combat aviation history. . . . The author strongly relates in the words and memories of the participants the gut-wrenching sense of loss and the frustration over the slow mission counts. . . . The author, through his extensive work in tracking down and interviewing those who trained and flew with his father--his commanders, pilots, fellow crewmen, ground personnel--has delivered a work of art, as well as a strong commemoration. . . . Highly recommended."--The Journal of America's Military Past

"The elder Scearce's tour of the Pacific begins with a mission on which every bomb misses a Japanese-occupied island entirely. It ends with pinpoint placement of 2,000-pound mines while flying a hundred feet above blazing enemy warships. In between, the detail is high resolution."--Air & Space Magazine

"Like Hillenbrand, Scearce convincingly shows that flying a B-24 was a difficult, high-risk occupation . . . . Phil Scearce's dramatic style of writing captures the feelings of flight crews in life-threatening situations as they flew to targets over ocean expanses, dropped their bombs, fought off Zero fighters, and frequently returned to their bases in damaged or mechanically malfunctioning ships. . . . With its vivid narrative and thirty-nine well chosen photographs, many from private collections, Finish Forty and Home will appeal strongly to a general public interested in World War II personal experiences as well as to professional military historians."--Michigan War Studies Review

PHIL SCEARCE is a graduate of the University of North Carolina at Chapel Hill and a 2009 graduate of the Middle Tennessee State University Writer's Loft Program. He is a member of the Tennessee Writer's Alliance. Phil resides in Murfreesboro, Tennessee. COLONEL JESSE E. STAY commanded the 42nd Squadron in the Pacific.
Loading...
or
Not Currently Available for Direct Purchase