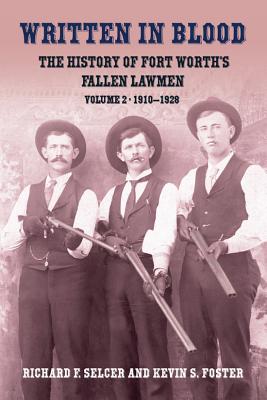 In 2010 Written in Blood: The History of Fort Worth’s Fallen Lawmen, Volume 1, told the stories of thirteen Fort Worth law officers who died in the line of duty between 1861 and 1909. Now Richard F. Selcer and Kevin S. Foster are back with Volume 2 covering another baker’s dozen line-of-duty deaths that occurred between 1910 and 1928. The stories are grouped into two sections: “When Blood Ran in the Streets, 1910-1919” and “Life Was Cheap, 1920-1928.” Not counting the two officers who died of natural causes (meningitis and drowning), these are more tales of murder, mayhem, and dirty work from all branches of local law enforcement: police, sheriff’s deputies, constables, and special officers, just like in Volume 1.

This era was, if anything, bloodier than the preceding era of the first volume. Fort Worth experienced a race riot, two lynchings, and martial law imposed by the U.S. Army while Camp Bowie was operating. Bushwhacking (such as happened to Peter Howard in 1915) and assassinations (such as happened to Jeff Couch in 1920) replaced blood feuds and old-fashioned shootouts as leading causes of death among lawmen. Violence was not confined to the streets either; a Police Commissioner was gunned down in his city hall office in 1917. Even the new category of “vehicular homicide” claimed a lawman’s life.

Selcer and Foster also relate the story of their murderers and of the times. Every chapter follows the arrest and trial of the perp(s) and their ultimate fate. How some of the accused were treated by the justice system and how they ended up will surprise you. Woven throughout is the story of law enforcement and the criminal justice system in the early 20th century, including the move from horseback to motorized transportation; how the FWPD wrestled with the city’s growing ethnic communities; bonding procedures back when policemen issued “bonds,” not tickets; and the insidious influence of the KKK in local law enforcement. Forensics science changed how crimes were solved, even if they were solved. Throughout it all, the man wearing the badge was always the front line of civilization. He laid his life on the line every time he stepped out onto the street. As a result some men bought life insurance (something else new); some men did not marry.

There are no saints here. These thirteen officers were all flesh-and-blood men. And their killers were not all mustache-twirling villains. Juries sometimes had trouble making the distinction, too. Written in Blood Volume 2 continues the story begun in the first volume, but it also stands alone as a fascinating slice of Fort Worth history and an examination of law enforcement in the old days.

“Written in Blood Volume 2, like its predecessor, will be a significant addition to the literature, both of Fort Worth history and the broader field of law enforcement history.”—Robert K. DeArment, author of Bat Masterson and Alias Frank Canton

“This volume will continue the much-needed chronicle of the ultimate sacrifices made by Fort Worth’s law enforcement officers in the line of duty while protecting the citizens from unlawful elements. Selcer and Foster are to be commended that they have undertaken the extensive research task to make sure that these dedicated men are not forgotten.”—J’Nell Pate, author of Livestock Legacy: The Fort Worth Stockyards, 1887-1987

"Although there is certainly plenty of violence and bloodletting, there is much more. The life story of each slain lawman is provided, and in most cases we begin to develop a kind of fondness for the lawman. . . . In addition to the actual killings, the Selcer-Foster team discusses the legal matters that sometimes took years to resolve. Infrequently lynch mobs formed to administer a quicker form of extra-legal punishment."--Wild West History Association Journal

"The authors do not limit themselves to violent expirations or profiles of victimization. As a result, the meningitis-induced death of James R. Dodd receives equal attention alongside the bloody shotgun shell dispatch of John A. Ogletree. Selcer and Foster also demonstrate that the reaper preyed upon all classes of lawmen, although rookie officials assigned to nighttime patrols in the notorious Hell's Half Acre faced particularly dangerous odds."--Southwestern Historical Quarterly


"What separates Written in Blood from other nineteenth- and twentieth-century law enforcement histories is the context in which the individual chapters are written. The authors not only understand but clearly place their history within the Progressive Era. . . . [T]he authors have set an extraordinarily high standard for books on law enforcement history and have raised the bar considerably, which is to their great credit."--New Mexico Historical Review


"A vivid recounting of a pivotal Fort Worth era. . . . Written in Blood seamlessly blends history and excellent prose. . . . In all, the authors make history into pretty great reading."--Fort Worth Weekly