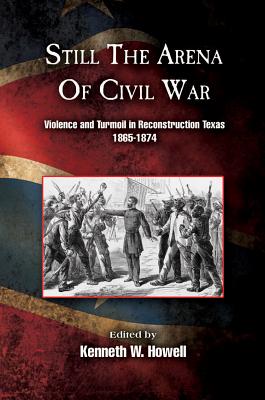 Still the Arena of Civil War

Violence and Turmoil in Reconstruction Texas, 1865-1874

Following the Civil War, the United States was fully engaged in a bloody conflict with ex-Confederates, conservative Democrats, and members of organized terrorist groups, such as the Ku Klux Klan, for control of the southern states. Texas became one of the earliest battleground states in the War of Reconstruction. Throughout this era, white Texans claimed that Radical Republicans in Congress were attempting to dominate their state through “Negro-Carpetbag-Scalawag rule.” In response to these perceived threats, whites initiated a violent guerrilla war that was designed to limit support for the Republican Party. They targeted loyal Unionists throughout the South, especially African Americans who represented the largest block of Republican voters in the region.

Was the Reconstruction era in the Lone Star State simply a continuation of the Civil War? Evidence presented by sixteen contributors in this new anthology, edited by Kenneth W. Howell, argues that this indeed was the case. Topics include the role of the Freedmen’s Bureau and the occupying army, focusing on both sides of the violence. Several contributors analyze the origins of the Ku Klux Klan and its operations in Texas, how the Texas State Police attempted to quell the violence, and Tejano adjustment to Reconstruction. Other chapters focus on violence against African-American women, the failure of Governor Throckmorton to establish law and order, and the role of newspaper editors influencing popular opinion. Finally, several contributors study Reconstruction by region in the Lower Brazos River Valley and in Lavaca County.

Praise For Still the Arena of Civil War: Violence and Turmoil in Reconstruction Texas, 1865-1874…

“This is a valuable contribution to Texas and Reconstruction history. The essays reflect an expanded range of topics about Reconstruction in Texas, especially the chapters on Tejano and African American women.”—Alwyn Barr, author of Reconstruction to Reform: Texas Politics, 1876-1906

“Still the Arena of Civil War should attract those interested in Reconstruction and African American history.”—Archie P. McDonald, author of Texas: A Compact History

“Violence is clearly organic to Texas’s experience of Reconstruction. No other southern state faced the frontier and borderland circumstances that escalated the body count in Reconstruction Texas.”—Patrick G. Williams, author of Beyond Redemption: Texas Democrats after Reconstruction

"The book clearly demonstrates that both agents of Reconstruction and those opposed to it used violence and fraud as a means to achieve their political goals. . . . Despite Texas' unique characteristics, Howell's compilation provides a framework applicable to future studies of Reconstruction in other Southern states."--Texas Books in Review

"Together, the essays provide a compelling, nuanced examination of the nature of the racial and political violence that characterized Reconstruction Texas. Recommended."--Cary D. Wintz, Choice

"In his detailed introduction, Howell provides an informative overview of the historiography of Reconstruction-era violence in the Lone Star State and in the South generally . . . . Carl H. Moneyhon provides an insightful analysis of the rise and fall of the Ku Klux Klan. . . . In another perceptive article, Rebecca A. Kosary examines the sexual violence perpetrated against black women by white men."--Southwestern Historical Quarterly

"Still the Arena of Civil War provides a definitive view of how Reconstruction failed in Texas specifically and how Texas was a typical example of defeated white Southern attitudes in general. It fills a broad niche in Reconstruction history by exploring the racial intricacies of a region not considered a 'typical' part of the Confederacy, revealing the additional racial dynamic of a Latino population amid the already tense black/white antagonism, and projecting those problems into the future as population migration transformed the West in the decades after the Civil War. Those looking for an outstanding example of Reconstruction history will find it in Still the Arena of Civil War."--H-CivWar, H-Net Reviews

"If there is a consensus among these essays, it might be that the rule of law failed, and any attempts to rectify said failure were fatally flawed by either poor design or bad intentions. Even in the worst of times, it seems, Anglo Texans reacted poorly to anything smacking of 'big government.'"--Journal of Southern History

"All the articles in the book are thoroughly researched, well-documented, and nicely written by distinguished scholars such as Dale Baum, Richard McCaslin, Carl H. Moneyhon, William L. Richter, James M. Smallwood, Charles D. Spurlin, and Andrés Tijerina. . . . It is also an excellent addition to the literature on the violence of the Reconstruction era. . . . Still the Arena of Civil War shows the horrific events that transpired in that era, how Reconstruction has been distorted in the American mind, and the betrayal of its egalitarian ideals forgotten. In so doing, this collection will assist Texans in having a more accurate sense of their past to better guide their future."--Texas Gulf Historical and Biographical Record

"[A] highly recommended acquisition for Texana and Civil War collections in academic and public libraries. History professors will no doubt want to consider this anthology of Texas Reconstruction essays to be on their reading lists for students."--Review of Texas Books

KENNETH W. HOWELL is an associate professor of history at Prairie View A&M University. He is the author of Texas Confederate, Reconstruction Governor: James Webb Throckmorton; co-author of The Devil’s Triangle: Ben Bickerstaff, Northeast Texans, and the War of Reconstruction in Texas and editor of The Seventh Star of the Confederacy: Texas during the Civil War.