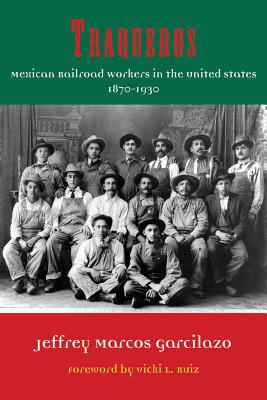 Perhaps no other industrial technology changed the course of Mexican history in the United States—and Mexico—than did the coming of the railroads. Tens of thousands of Mexicans worked for the railroads in the United States, especially in the Southwest and Midwest. Construction crews soon became railroad workers proper, along with maintenance crews later. Extensive Mexican American settlements appeared throughout the lower and upper Midwest as the result of the railroad. The substantial Mexican American populations in these regions today are largely attributable to 19th- and 20th-century railroad work. Only agricultural work surpassed railroad work in terms of employment of Mexicans.

The full history of Mexican American railroad labor and settlement in the United States had not been told, however, until Jeffrey Marcos Garcílazo’s groundbreaking research in Traqueros. Garcílazo mined numerous archives and other sources to provide the first and only comprehensive history of Mexican railroad workers across the United States, with particular attention to the Midwest. He first explores the origins and process of Mexican labor recruitment and immigration and then describes the areas of work performed. He reconstructs the workers’ daily lives and explores not only what the workers did on the job but also what they did at home and how they accommodated and/or resisted Americanization. Boxcar communities, strike organizations, and “traquero culture” finally receive historical acknowledgment. Integral to his study is the importance of family settlement in shaping working class communities and consciousness throughout the Midwest.

“Traqueros is particularly important because of the originality of the research from numerous archives. Several interviews further enrich the work. Highly recommended.”—Dionicio Valdés, author of Barrios Norteños

“Jeffrey Garcílazo’s book is a signal contribution to the field of Mexican American history—it will long stand in the historiography as the first book in this area of Chicano history from which later efforts will depart.”—Roberto Calderón, author of  Mexican Coal Mining Labor in Texas and Coahuila, 1880-1930

“A meticulous researcher, Garcilazo has gathered a stunning array of archival materials on Mexican railroad workers. From his sources, he reconstructs episodes of daily life from lonely encampments to spontaneous strikes. His arguments on economic stratification, ethnic enclaves, family ties, and identity are solidly grounded in primary documents. Never overstepping the bounds of his evidence, Garcilazo situates traqueros within the larger context of American working class history and his keen insights have retained their currency over the passage of time.”—from the foreword by Vicki L. Ruiz

"Garcilazo has made a powerful contribution to the historiography of the railroads as well as the history of Mexican workers in the United States. . . . [I]t is refreshing at a time when analyses of the rise of big business and railroads operate at a level of abstraction that has left the picks and shovels of common laborers barely discernible. Traqueros are an invisible labor force no longer."--H-SHGAPE, H-Net Review

"[Traqueros] makes an important contribution to our understanding of migratory workers and the social conditions of working class family life, and it offers a detailed and nuanced portrait of railroad work in the era of Mexican immigrant dominance in southwestern track work."--Southwestern Historical Quarterly

"Traqueros is the first large-scale investigation of the substance and breadth of traqueros' experiences at work and in their 'boxcar' communities. . . . [Garcilazo's] years of dedicated research have yielded an intimate yet comprehensive portrait of Mexican immigrant track men and their communities."--Journal of American History

"Garcilazo's study provides valuable and innovative insights into the contributions of traqueros in building U.S. railroads, the nation's first big business. In so doing, his work provides new understandings of the origins of the nation's Chicano community."--Journal of Arizona History

"In his work, Garcilazo accentuates the strength, resilience, and resoluteness of many traqueros determined to earn a living and make a better life for themselves and their families. The workers resisted the dehumanizing treatment inflicted upon them, while retaining their sense of identity and culture. Drawing on a wide range of sources, including personal recollections, Professor Garcilazo's book is a worthwhile introduction for those who are new to the fields of Mexican immigration and labor history in the pre-Depression era of the United States."--Great Plains Quarterly

"After reading Traqueros it becomes obvious, without these Mexican workers, the railroads would have never expanded and this country grown so prosperous. Unfortunately, the myth that the Chinese built the railroads still persists. . . . Traqueros not only should be included in any Chicano and Labor Studies programs but also in high school and college history classes."--La Bloga