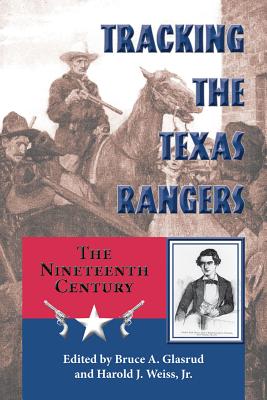 Determining the role of the Rangers as the state evolved and what they actually accomplished for the benefit of the state is a difficult challenge—the actions of the Rangers fit no easy description. There is a dark side to the story of the Rangers; during the war with Mexico, for example, some murdered, pillaged, and raped. Yet these same Rangers eased the resultant United States victory. Even their beginning and the first use of the term “Texas Ranger” have mixed and complex origins.

Tracking the Texas Rangers covers topics such as their early years, the great Comanche Raid of 1840, and the effective use of Colt revolvers. Article authors discuss Los Diablos Tejanos, Rip Ford, the Cortina War, the use of Hispanic Rangers and Rangers in labor disputes, and the recapture of Cynthia Ann Parker and the capture of John Wesley Hardin. The selections cover critical aspects of those experiences—organization, leadership, cultural implications, rural and urban life, and violence.

In their introduction, editors Bruce A. Glasrud and Harold J. Weiss, Jr., discuss various themes and controversies surrounding the 19th-century Rangers and their treatment by historians over the years. They also have added annotations to the essays to explain where new research has shed additional light on an event to update or correct the original article text.


Praise For Tracking the Texas Rangers: The Nineteenth Century (Frances B. Vick Series #10)…

“The editors of this anthology, prominent Ranger historians in their own right, have assembled a distinguished list of authors for an anthology that traces the history of the Texas Rangers during the decades when Texas was still the Wild West. The authors are all noted historians, and the selection ensures that the collective story they tell covers the wide range of viewpoints of who the Rangers were and what they did—black hats, white hats, and all the grays in between. This anthology will endure as a fair and balanced chronicle, both in narrative and interpretation, of arguably the foremost law-enforcement agency in American history.”—Robert M. Utley, author of Lone Star Justice: The First Century of the Texas Rangers

“I appreciated the extensive background information in the introduction and a nice bibliographical essay that will be important for other students of these topics.”—Paul Spellman, author of Captain J. A. Brooks, Texas Ranger and Captain John H. Rogers, Texas Ranger

“Glasrud and Weiss have created an important anthology of 21st-century perspectives on the Texas Rangers. It includes contributions and assessments by many of the leading scholars—a must for those studying the mystique of a Texas legend and an American icon.”—Byron A. Johnson, Director, Texas Ranger Hall of Fame and Museum, Waco

"Tracking the Texas Rangers provides not only a rounded portrait of not only the Ranger' history, but also their societal impact, how pop culture viewed them, and their long-term legacy. . . . A timeline, bibliography, and index round out this 'must-read' for anyone curious to learn more about the Texas Rangers!"--Midwest Book Review

“This collection is a vitally important contribution. Every top scholar in the field of modern Texas Ranger studies is well represented here. The book is thorough in offering a thematic rather than a biographical approach, and the central theme of institutional change in times of transition clearly runs through the essays like a connecting thread.”—Michael L. Collins, author, Texas Devils

"Tracking the Texas Rangers is a valuable resource for Ranger enthusiasts and scholars for several reasons. The articles provide a good overview of nineteenth-century Ranger development from their earliest mission of frontier Indian defense, through legend building as a hard-fighting counter-guerrilla force during and after the U.S.-Mexico War, to their transformation into a law enforcement agency in the last quarter of the century. . . . [It] is a treasure map leading to additional sources for nineteenth-century Ranger history."--Southwestern Historical Quarterly

"In the superb anthology [the editors] have assembled, all sides of the Rangers of the 1800s are examined by an impressive company of Ranger scholars, including Glasrud and Weiss themselves. . . . No collection of books about the iconic Ranger force will be complete without Tracking the Texas Rangers."--Bill O'Neal, State Historian of Texas, WWHA Journal

"[An] impressive anthology. . . . [T]his collection provides a thorough overview of early Ranger history. . . . Glasrud and Weiss have compiled a commendable study which is engaging, informative, and evenhanded."--Panhandle-Plains Historical Review

"As editors, Glasrud and Weiss artfully compiled an anthology which covers virtually every significant event and individual of the nineteenth century Rangers. The chapters are rich in detail and interpretation."--Bill O'Neal, State Historian of Texas, East Texas Historical Journal

BRUCE A. GLASRUD is Professor Emeritus of History, California State University, East Bay; Retired Dean, School of Arts and Sciences, Sul Ross State University; and a Fellow of the Texas State Historical Association and of the East Texas Historical Association. Glasrud has published nineteen books including Buffalo Soldiers in the West and Brothers to the Buffalo Soldiers. He lives in San Antonio.

HAROLD J. WEISS, Jr., is Professor Emeritus of History, Government, and Criminal Justice at Jamestown Community College. He received his doctorate in history from Indiana University at Bloomington and is the author of Yours to Command: The Life and Legend of Texas Ranger Captain Bill McDonald.