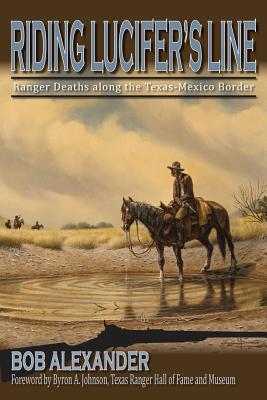 Ranger Deaths along the Texas-Mexico Border (Frances B. Vick Series #11)

The Texas-Mexico border is trouble. Haphazardly splashing across the meandering Rio Grande into Mexico is—or at least can be—risky business, hazardous to one’s health and well-being. Kirby W. Dendy, the Chief of Texas Rangers, corroborates the sobering reality: “As their predecessors for over one hundred forty years before them did, today’s Texas Rangers continue to battle violence and transnational criminals along the Texas-Mexico border.”

In Riding Lucifer’s Line, Bob Alexander, in his characteristic storytelling style, surveys the personal tragedies of twenty-five Texas Rangers who made the ultimate sacrifice as they scouted and enforced laws throughout borderland counties adjacent to the Rio Grande. The timeframe commences in 1874 with formation of the Frontier Battalion, which is when the Texas Rangers were actually institutionalized as a law enforcing entity, and concludes with the last known Texas Ranger death along the border in 1921. Alexander also discusses the transition of the Rangers in two introductory sections: “The Frontier Battalion Era, 1874–1901” and “The Ranger Force Era, 1901–1935,” wherein he follows Texas Rangers moving from an epochal narrative of the Old West to more modern, technological times.

Written absent a preprogrammed agenda, Riding Lucifer’s Line is legitimate history. Adhering to facts, the author is not hesitant to challenge and shatter stale Texas Ranger mythology. Likewise, Alexander confronts head-on many of those critical Texas Ranger histories relying on innuendo and gossip and anecdotal accounts, at the expense of sustainable evidence—writings often plagued with a deficiency of rational thinking and common sense.

“This is Bob’s best book to date. It should attract a growing audience of Texas and Western history buffs.”—Louis R. Sadler, co-author, The Texas Rangers and the Mexican Revolution

“Riding Lucifer’s Line is written in the popular vein with vivid characterizations. Those interested in outlaw-lawman history will be attracted to the blood-and-thunder stories.”—Harold J. Weiss, Jr., author, Yours to Command: The Life and Legend of Texas Ranger Captain Bill McDonald

"Author Bob Alexander has taken on the task of telling the stories of the deaths of twenty-five of those Rangers and in so doing has provided a curiously refreshing perspective to otherwise oft-told tales. . . . Alexander has once again put together a remarkable amount of extensive research, attested by the prodigious endnotes and bibliography, into a series of stories told with his usual ubiquitous flair. . . . It's difficult to read this author's casual narrative without a grin. And it's a good yarn well told."--Western Historical Quarterly

"Once again, Bob Alexander has written a solid, meticulously researched book that presents an interesting topic in an enjoyable form. With vivid characterizations, Bob Alexander wants to tell you a good story of the men who rode Lucifer's Line."--Journal of South Texas

"The vast majority of [Ranger] deaths occurred at the hands of Mexican bandits, castle and horse thieves, or vengeful villains, who ambushed the Rangers over and over again. . . . Alexander is, however, very fair in his account of what happened, and will blame the Rangers when they were at fault. . . . Surprisingly, the worst years were 1915-1919 when no less than nine Rangers were killed, much of this the byproduct of smuggling on top of the usual cattle and horse theft."--Denver Westerners Roundup

"It is an insightful work deserving consideration by all. These Rangers who gave their lives certainly merit inclusion in the pages of history. How and why they died is a worthy topic for reflection, and Alexander's effort is to be commended."--The Americas

"[This is] a very readable, entertaining, and informative collection of Ranger stories for readers interested in Old West shootouts between lawmen and outlaws. . . . Riding Lucifer's Line will be useful to scholars looking for sources about Texas Rangers, general readers interested in true Wild West stories, and perhaps to lawmen contemplating what can go wrong in the blink of an eye in their line of work."--Southwestern Historical Quarterly

"Alexander is a marvelous storyteller; he writes well and he is a thorough researcher. He uses these abilities to unravel intricate events, such as the El Paso Salt War or the violence and varied deaths along the border in 1918. . . . This book is well worth purchasing and reading. Bob Alexander is a skilled craftsman, an inquisitive investigator, and a knowledgeable Ranger historian."--Journal of Arizona History

BOB ALEXANDER began a policing career in 1965 and retired as a special agent with the U.S. Treasury Department. He is the author of Rawhide Ranger, Ira Aten; Winchester Warriors: Texas Rangers of Company D, 1874-1901; Fearless Dave Allison, Border Lawman; Desert Desperadoes: The Banditti of Southwestern New Mexico; and Lawmen, Outlaws, and SOBs. He lives in Maypearl, Texas.
Loading...
or
Not Currently Available for Direct Purchase