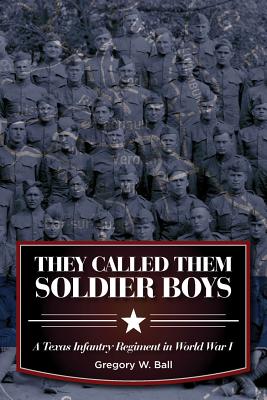 They Called Them Soldier Boys

They Called Them Soldier Boys offers an in-depth study of soldiers of the Texas National Guard’s Seventh Texas Infantry Regiment in World War I, through their recruitment, training, journey to France, combat, and their return home. Gregory W. Ball focuses on the fourteen counties in North, Northwest, and West Texas where officers recruited the regiment’s soldiers in the summer of 1917, and how those counties compared with the rest of the state in terms of political, social, and economic attitudes.

In September 1917 the “Soldier Boys” trained at Camp Bowie, near Fort Worth, Texas, until the War Department combined the Seventh Texas with the First Oklahoma Infantry to form the 142d Infantry Regiment of the 36th Division. In early October 1918, the 142d Infantry, including more than 600 original members of the Seventh Texas, was assigned to the French Fourth Army in the Champagne region and went into combat for the first time on October 6. Ball explores the combat experiences of those Texas soldiers in detail up through the armistice of November 11, 1918.


Praise For They Called Them Soldier Boys: A Texas Infantry Regiment in World War I (War and the Southwest Series #11)…

“Ball has done a fine job to describe and analyze the types of men who served—regarding their backgrounds and economic and social status—which fits well with the important trend relating military history to social history.”—Joseph G. Dawson, editor, The Texas Military Experience

“This study will be valuable to those interested in the demographics of a Texas unit in this era, and how the people of Texas responded to the mobilization and demobilization efforts.”—Mark E. Grotelueschen, author of The AEF Way of War
“Gregory W. Ball’s well-researched book on the 7th Texas Infantry is the first study of a single Texas regiment in World War I. The author follows them through the streets of ravaged French towns, sees them hugging the bottoms of shallow fox holes, and identifies each soldier by name and county if he fell from German fire.”—J’Nell Pate, author of Arsenal of Defense

"This study is very much concerned with the Texan rural agricultural background of the men that were recruited, including delving into their age, origins, occupation and marital status based on a large sample of their original draft cards. As such, it is as much a social as a military study."--The Western Front Association Stand To!

"Gregory W. Ball reaches back to a simpler time to paint a picture of a bygone Texas, filled with exuberance and innocence. Using correspondence, memoirs, after-action reports and newspaper accounts, he chronicles the lives of naive young men eager to go to war and show Europe that America would finish a war that had, in less than three years, killed millions. . . . They Called Them Soldier Boys is highly readable; it is strongly suggested to anyone interested in wishing to sense the atmosphere of rural Texas in the early 1900s or the United States' involvement in World War I."--Journal of South Texas

"In eight well written and incredibly meticulous chapters, Ball follows the 7th Texas Infantry from recruitment, training, time on the frontlines, and their return to Texas. . . . Ball offers both praise and critique of the regiment's war-time exploits in a balanced manner as he emphasizes the regiment's lack of experience, shortcomings, failures, but also their successes and ability to adapt their tactics to the situations they faced."--East Texas Historical Journal

"Ball's contribution with this volume represents the first comprehensive study of a Texas regiment in the war. The author's extensive research into the demographics of the regiment's members is impressive. Utilizing primary sources, including census records, newspapers, and military archives, Ball's study is a valuable blending of social and military history. . . . This book will be of interest as much to historians pondering the social implications of war as to military historians of World War I."--Southwestern Historical Quarterly

"Ball, a USAF historian, looks at the regiment from its recruitment, through organization and training, movement to France, time at the front, return home, and its legacy. Perhaps the best parts of the book are his profile of the troops and his two excellent chapters on the regiment's tour at the front, some 24 often harrowing days in the Meuse-Argonne."--New York Military Affairs Symposium Review

"Overall this is a very approachable and interesting social and military history that will appeal to historians of the Great War as well as those interested in the National Guard’s experience in integrating with the regular army."--Budd Jones, H-WAR

GREGORY W. BALL received his Ph.D. in United States History from the University of North Texas in 2010. He served on active duty with the USAF from 1995-2006 and remains an active member of the USAF Reserve. Ball serves as a historian for the United States Air Force in San Antonio.
Loading...
or
Not Currently Available for Direct Purchase