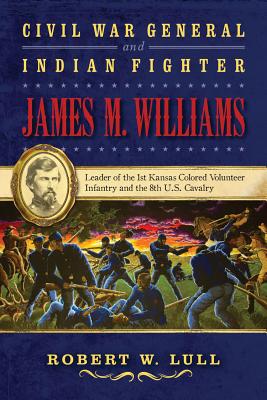 Leader of the 1st Kansas Colored Volunteer Infantry and the 8th U.S. Cavalry (War and the Southwest Series #12)

The military career of General James Monroe Williams spanned both the Civil War and the Indian Wars in the West, yet no biography has been published to date on his important accomplishments, until now. From his birth on the northern frontier, westward movement in the Great Migration, rush into the violence of antebellum Kansas Territory, Civil War commands in the Trans-Mississippi, and as a cavalry officer in the Indian Wars, Williams was involved in key moments of American history. Like many who make a difference, Williams was a leader of strong convictions, sometimes impatient with heavy-handed and sluggish authority.

Building upon his political opinions and experience as a Jayhawker, Williams raised and commanded the ground-breaking 1st Kansas Colored Volunteer Infantry Regiment in 1862. His new regiment of black soldiers was the first such organization to engage Confederate troops, and the first to win. He enjoyed victories in Missouri, Indian Territory (Oklahoma), and Arkansas, but also fought in the abortive Red River Campaign and endured defeat and the massacre of his captured black troops at Poison Spring. In 1865, as a brigadier general, Williams led his troops in consolidating control of northern Arkansas. Williams played a key role in taking Indian Territory from Confederate forces, which denied routes of advance into Kansas and east into Arkansas. His 1st Kansas Colored Volunteer Infantry Regiment helped turn the tide of Southern successes in the Trans-Mississippi, establishing credibility of black soldiers in the heat of battle.

Following the Civil War, Williams secured a commission in the Regular Army’s 8th Cavalry Regiment, serving in Arizona and New Mexico. His victories over Indians in Arizona won accolades for having “settled the Indian question in that part of Arizona.” He finally left the military in 1873, debilitated from five wounds received at the hands of Confederates and hostile Indians.

“I am impressed by the depth of Lull’s research. Williams’s leadership and courage in organizing and commanding the 1st Kansas underscores that African Americans could fight and die as bravely as white Americans.”—Edwin C. Bearss, Historian Emeritus, US National Park Service, and author, Fields of Honor: Pivotal Battles of the Civil War

“Lull has done painstaking research in available primary sources to piece together Williams’s life.”—Nicole Etcheson, author, Bleeding Kansas and A Generation at War

"Lull's book fills a gap in the literature on the Civil War in Arkansas by telling us more than we ever knew before about Williams."--Arkansas Historical Quarterly

"An excellent biography of this little known officer, which throws considerable light on an often neglected theatre of the Civil War and the origins of the U.S. Colored Troops."--NYMAS Review

"The author writes well, and he has done an impressive amount of research. . . . All those interested in Bleeding Kansas, the Civil War in the Trans-Mississippi theater, and the postwar 'Indian-fighting' army will find much to enjoy in this volume."--Kansas History

"Like many figures in American history, James Williams's life was controversial. He was a Kansas Jayhawker, he recruited blacks for Union service before it was acceptable to do so, and he even commissioned black officers. Significantly, his black troops were the first to best white Confederates in battle during the war, and he mercilessly pursued and killed Indians in the post-Civil War American West. Lull's text will be of primary interest to military historians and especially to those who follow the lives of pre-Civil War opponents of slavery."--Southwestern Historical Quarterly

"Gallantly leading his men across Cabin Creek against the Confederate center at Honey Springs and in holding a battle line at Poison Spring in the face of blistering Confederate fire, Williams displayed the fearless determination that characterized his life. . . . Lull effectively portrays him as an officer of 'extraordinary accomplishments,' deserving of recognition for the roles he played in the Civil War, proving African American abilities, and securing the Southwest."--Western Historical Quarterly

"Lull presents a readable, informative account of the life and military career of a significant figure in the western Civil War and Indian conflicts. . . . Civil War General and Indian Fighter James M. Williams is a long-awaited addition to the history of the Trans-Mississippi West and a valuable insight into the role and struggles of African Americans."--New Mexico Historical Review

"While Lull tracks Williams's entire life, he primarily focuses on the Civil War years. This provides an interesting opportunity to discuss the racial dynamics of the conflict in the Great Plains. Williams led white, black, and Indian soldiers into battle, and his men fought both white and Indian Confederates. This racial tension led to atrocities on both sides."--Great Plains Historical Quarterly

ROBERT W. LULL is a Vietnam veteran, retired Army officer, and most recently, a college history instructor. A graduate of Trinity University, he holds advanced degrees from the University of Texas, Webster University, and the American Military University. He lives with his wife near Waco, Texas.
Loading...
or
Not Currently Available for Direct Purchase