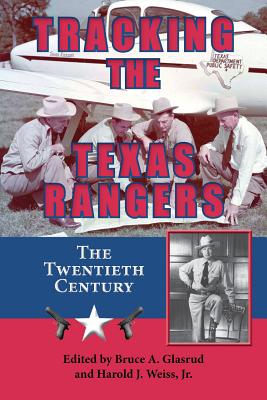 Tracking the Texas Rangers: The Twentieth Century is an anthology of fifteen previously published articles and chapter excerpts covering key topics of the Texas Rangers during the twentieth century. The task of determining the role of the Rangers as the state evolved and what they actually accomplished for the benefit of the state is a difficult challenge. The actions of the Rangers fit no easy description. There is a dark side to the story of the Rangers; during the Mexican Revolution, for example, some murdered with impunity. Others sought to restore order in the border communities as well as in the remainder of Texas. It is not lack of interest that complicates the unveiling of the mythical force. With the possible exception of the Alamo, probably more has been written about the Texas Rangers than any other aspect of Texas history.

Tracking the Texas Rangers covers leaders such as Captains Bill McDonald, “Lone Wolf” Gonzaullas, and Barry Caver, accomplished Rangers like Joaquin Jackson and Arthur Hill, and the use of Rangers in the Mexican Revolution. Chapters discuss their role in the oil fields, in riots, and in capturing outlaws. Most important, the Rangers of the twentieth century experienced changes in investigative techniques, strategy, and intelligence gathering. Tracking looks at the use of Rangers in labor disputes, in race issues, and in the Tejano civil rights movement. The selections cover critical aspects of those experiences—organization, leadership, cultural implications, rural and urban life, and violence.

In their introduction, editors Bruce A. Glasrud and Harold J. Weiss, Jr., discuss various themes and controversies surrounding the twentieth-century Rangers and their treatment by historians over the years. They also have added annotations to the essays to explain where new research has shed additional light on an event to update or correct the original article text.

BRUCE A. GLASRUD is Professor Emeritus of History at California State University, East Bay, retired dean of the School of Arts and Sciences at Sul Ross State University, and a Fellow of the Texas State Historical Association and of the East Texas Historical Association. Glasrud has published nineteen books including Buffalo Soldiers in the West and Brothers to the Buffalo Soldiers. He lives in San Antonio, Texas.

HAROLD J. WEISS, Jr., is Professor Emeritus of History, Government, and Criminal Justice at Jamestown Community College. He received his doctorate in history from Indiana University at Bloomington and is the author of Yours to Command: The Life and Legend of Texas Ranger Captain Bill McDonald (UNT Press). He lives in Leander, Texas.