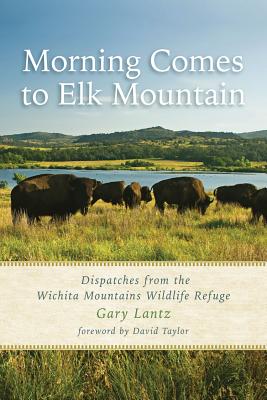 Organized as a series of monthly journal entries, Morning Comes to Elk Mountain is Lantz’s response to ten years of exploring the rough and unexpected beauty of the Wichita Mountains Wildlife Refuge. A combination of memoir, natural history, Native American history, and geology, this book is enriched by 20 color photos and a map to appeal to the seasoned visitor as well as the newcomer to the refuge.

The national wildlife refuge that’s the focus of the book was among the first established by President Theodore Roosevelt. He helped save the Wichitas from miners and land speculators, and instead the harsh yet scenic area became the nation’s first bison refuge, established to keep this American icon from slipping into extinction.

Today the refuge hosts more than a million visitors a year, most of them coming to hike the trails, climb the rocks, photograph bison and prairie dogs, or simply commune with a beautiful, wild area that remains a spiritual landscape for the Kiowa and Comanche Indians who call it home.

GARY LANTZ was born in Barnsdall, Oklahoma, and attended universities in Oklahoma. A feature writer for the Daily Oklahoman, Outdoor Oklahoma Magazine, and Oklahoma Today, Lantz is a former Oklahoma Wildlife Federation Conservation Communicator of the Year. He lives in Taos, New Mexico, with his wife, where he works on books and wildlife photography.
Loading...
or
Not Currently Available for Direct Purchase