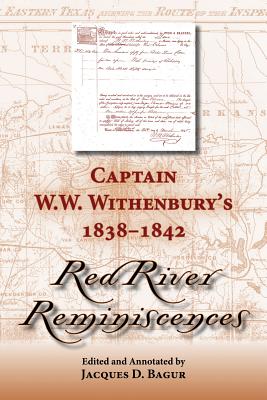 W. W. Withenbury was a famous river boat captain during the mid-1800s. In retirement, he wrote a series of letters for the Cincinnati Commercial, under the title “Red River Reminiscences.” Jacques Bagur has selected and annotated 39 letters describing three steamboat voyages on the upper Red River from 1838 to 1842.

Withenbury was a master of character and incident, and his profiles of persons, including three signers of the Texas Declaration of Independence, reflect years of acquaintance. The beauty of his writing ranks this among the best of the reminiscences that were written as the steamboat era was declining.

“Bagur is an expert on the Red River in the nineteenth century, and it shows in this work. Informative and entertaining.” —Randolph B. "Mike" Campbell, author of Gone to Texas: A History of the Lone Star State

“This will rank as a great assistance to researchers if anyone wants to attack history of the Red River again. Some of his in-depth research was fabulous.”—Skipper Steely, author of Red River Pioneers

"The words of this experienced steamboat commander transport the reader to the antebellum years, for which he colorfully describes customs, people, and the multiple problems that occurred above the Red River logjam known as the Great Raft. Bagur . . . has expertly edited Withenbury's reminiscences, and he has added much more to the original text with maps, background information, annotations, and detailed footnotes."--Southwestern Historical Quarterly

"A superb job of editing and annotation makes Captain Withenbury's tales a worthwhile read and fruitful source for research. . . . It is exemplary of scholarship at a proficient and high quality level."--Chronicles of Oklahoma

JACQUES D. BAGUR holds a degree from LSU and has spent more than thirty years in applied research specializing in the geography of Louisiana and East Texas. The author of UNT Press’s A History of Navigation on Cypress Bayou and the Lakes and Antebellum Jefferson, Texas, he lives in Baton Rouge, Louisiana.
Loading...
or
Not Currently Available for Direct Purchase