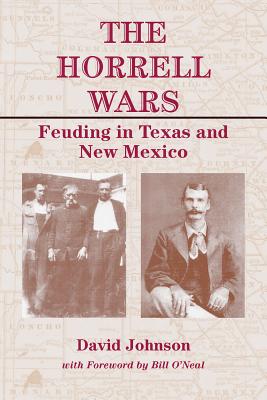 For decades the Horrell brothers of Lampasas, Texas, have been portrayed as ruthless killers and outlaws, but author David Johnson paints a different picture of these controversial men. The Horrells were ranchers, and while folklore has encouraged the belief that they built their herds by rustling, contemporary records indicate a far different picture. The family patriarch, Sam Horrell, was slain at forty-eight during a fight with Apaches in New Mexico. One Horrell son died in Confederate service; of the remaining six brothers, five were shot to death. Only Sam, Jr., lived to old age and died of natural causes.

Johnson covers the Horrells and their wars from cradle to grave. Their initial confrontation with the State Police at Lampasas in 1873 marked the most disastrous shootout in Reconstruction history and in the history of the State Police. The brothers and loyal friends then fled to New Mexico, where they became entangled in what would later evolve into the violent Lincoln County War. Their contribution, known to history as the Horrell War, has racial overtones in addition to the violence that took place in Lincoln County.

The brothers returned to Texas where in time they became involved in the Horrell-Higgins War. The family was nearly wiped out following the feud when two of the brothers were killed by a mob in Bosque County. Johnson presents an up-to-date account of these wars and incidents while maintaining a neutral stance necessary for historical books dealing with feuds. He also includes previously unpublished photographs of the Horrell family and others.

“Bloodletting and villainy is nothing new in Texas history, especially in recounting the many feuds that occurred in the late 1800s. The Horrell-Higgins feud was one of those, and the ill-fated Horrell brothers gave as well as they got, both in Texas and in the New Mexico Territory. Dave Johnson’s research presents an objective view of the turmoil and violence that was the hallmark of the Horrells’ presence, and at the same time provides a better understanding of those events. It is the real ‘wild west’ unveiled through primary sources and incisive interpretation.”—Rick Miller, author of Texas Ranger John B. Jones and the Frontier Battalion, 1874-1881

“The bloody fighting between the Horrell and Higgins families, typical of so many Texas feuds, was too much for the borders of the Lone Star State. From Lincoln County, New Mexico, to Lampasas County, Texas, the Horrells left behind a trail of blood. In their own way, they taught the fighting men who later followed Billy the Kid how to deal with enemies. Dave Johnson has given us the complete story of the Horrells, a fascinating and accurate history told in a fast paced style.”—Chuck Parsons, author of The Sutton-Taylor Feud and co-author of A Lawless Breed

“David Johnson has compiled a meticulous, richly detailed account of the feud and its participants, including a thorough examination of the background of everyone involved. Johnson has provided special depth to the Horrell family, and he makes a case that the brothers were not the sorry lot of cattle thieves that has been commonly supposed. Indeed, the author challenges many popular assumptions about the Horrell-Higgins Feud.”—from the foreword by Bill O’Neal, author of The Johnson-Sims Feud and The Bloody Legacy of Pink Higgins

"During their infamous 'race war' against Mexican-American settlers, [the Horrells] survived a merciless plot instigated by a priest to burn their entire family alive, including women and children; then, they engaged in the horrific slaughter of innocent Mexican-American civilians during a dance celebration. A saga of violence, savagery, and the dark side of human nature, The Horrell Wars is enthralling to scholars and lay readers alike."--Midwest Book Review

"In a word, the Horrells were a family who seemingly could not avoid trouble. . . . Shoot first was what they did, and this may have been part of their basic philosophy of life. . . . Johnson not only has unearthed an impressive amount of new material on their Texas troubles during Reconstruction and their later feud with the Higgins clan, but he has also uncovered considerable information on the New Mexico troubles--prior to the entrance of Billy the Kid."--Wild West History Association Journal

"[Johnson] details how former Confederates, including the Horrells, were affected by the war, and graphically illustrates the callous disregard for human life that pervaded the frontier as a result of the war. This disregard, when mixed with a ready supply of guns and alcohol, proved a potent brew."--Southwestern Historical Quarterly

"Overall, this is a compelling, complicated, and often tragic history of a family who often looked for trouble and found it or, despite their best efforts, trouble still managed to find them. At times this was due to their reputation, as described in the final chapter, which documents how Matt and Tom Horrell were brutally gunned down in 1879 while being held in a Meridian, Texas, jail for a crime they in all likelihood did not commit."--New Mexico Historical Review

DAVID JOHNSON has received degrees from Pennsylvania State University and Purdue University. He is the author of John Ringo, King of the Cowboys and The Mason County “Hoo Doo” War, 1874–1902, both published by the University of North Texas Press. He lives in Zionsville, Indiana.
Loading...
or
Not Currently Available for Direct Purchase