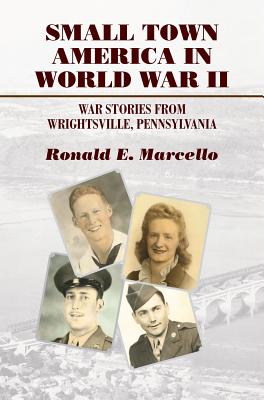 Historians acknowledge that World War II touched every man, woman, and child in the United States. In Small Town America in World War II, Ronald E. Marcello uses oral history interviews with civilians and veterans to explore how the citizens of Wrightsville, Pennsylvania, responded to the war effort. Located along the western shore of the Susquehanna River in York County, Wrightsville was a transportation hub with various shops, stores, and services as well as industrial plants.

Interviews with citizens and veterans are organized in sections on the home front; the North African-Italian, European, and Pacific theatres; stateside military service; and occupation in Germany. Throughout Marcello provides introductions and contextual narrative on World War II as well as annotations for events and military terms.

Overseas the citizens of Wrightsville turned into soldiers. An infantryman in the Italian campaign, Alfred Forry, explained, “I was forty-five days on the line wearing the same clothes, but everybody was in the same situation, so you didn’t mind the stench and body odors.” A veteran of the Battle of the Bulge, Edward Reisinger, remembered, “Replacements had little chance of surviving. They were sent to the front one day, and the next day they were coming back with mattress covers over them. The sergeants never knew the names of these people.” Mortar man Donald Peters described the death of a buddy who was hit by artillery shrapnel: “His arm was just hanging on by the skin, and his intestines were hanging out.”

In the conclusion Marcello examines how the war affected Wrightsville. Did the war bring a return to prosperity? What effects did it have on women? How did wartime trauma affect the returning veterans? In short, did World War II transform Wrightsville and its citizens, or was it the same town after the war?

“Marcello’s first-hand accounts convey the hardships and horrors of wartime service—often in vivid detail—along with the monotony and various irritants that filled the periods that punctuated exposure to combat. Occasionally, Marcello’s subjects also reveal the flashes of humor that helped them endure the unendurable.”—Gregory J. W. Urwin, author of Facing Fearful Odds: The Siege of Wake Island and Victory in Defeat: The Wake Island Defenders in Captivity, 1941-1945

“World War II enthusiasts will find the combat narratives appealing. Ron Marcello has a well-earned reputation as an oral historian, and these interviews are focused and informative.”—Thomas Saylor, author of Remembering the Good War: Minnesota’s Greatest Generation

“Ronald Marcello, a true master of oral history, has worked his magic again. Guided along by Marcello's penetrating interviews and sure editing, Small Town America in World War II is a gem of social history. Within these fascinating pages, we see, through the eyes of those who lived the history, just how profoundly World War II affected one American small town. I strongly recommend this book for anyone who is interested in the realities of that war and the personal experiences of individual Americans who fought it.”—John C. McManus, author of The Deadly Brotherhood: The American Combat Soldier in World War II and September Hope: The American Side of a Bridge Too Far

“It is amazing how the experiences of ‘average’ Americans can captivate.  That’s what happens when one reads this book, the reader is captivated by Marcello’s accounts of life in ‘small town’ USA and some of her sons who went to war.”—Fred Allison, head of the Oral History Unit, Marine Corps History and Museum Division

"The interviews are organized by the subjects' connections to salient locations--the home front; the North African-Italian, European, and Pacific Theatres; stateside military service; and the occupation of Germany. The candid personal testimonies offer a unique glimpse to the challenges, horrors, and realities of war."--Midwest Book Review

"This is an excellent compendium of oral histories and does a fine job of personifying an American community's experience during WWII and its ability to recover from it relatively unscathed."--Military

"Bringing the history of the war away from large urban centers and notable historical figures only strengthens historians' understanding of the impact of World War II on the United States."--Military History of the West

"Marcello's mastery of the oral history technique--knowing the right questions to ask--is apparent in the way that he draws out his subjects' memories of the global conflict. He also weaves together the narrative by inserting the necessary historical background within those accounts, allowing each story to flow in a readable and understandable way."--Army History

Born in Wrightsville, Pennsylvania, RONALD E. MARCELLO earned his PhD at Duke University. He is professor emeritus of history at the University of North Texas and the co-author/editor of Warriors and Scholars: A Modern War Reader and Remembering Pearl Harbor: Eye-Witness Accounts of American Men and Women.
Loading...
or
Not Currently Available for Direct Purchase