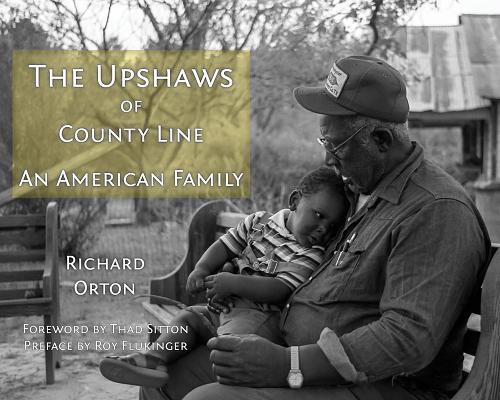 The Upshaws of County Line

Guss, Felix, and Jim Upshaw founded the community of County Line in the 1870s in northwest Nacogdoches County, in deep East Texas.  As with hundreds of other relatively autonomous black communities created at that time, the Upshaws sought a safe place to raise their children and create a livelihood during Reconstruction and Jim Crow Texas.
In the late 1980s photographer Richard Orton visited County Line for the first time and became aware of a world he did not know existed as a white man.  He met some remarkable people there who changed his life.

The more than 50 duotone photographs and text convey the contemporary experience of growing up in a "freedom colony." Covering a period of twenty-five years, photographer Richard Orton juxtaposes his images with text from people who grew up in and have remained connected to their birthplace.  Thad Sitton's foreword sets the community in historical context and Roy Flukinger points out the beauty of the documentary photographs.

This book should appeal to anyone interested in American or Texas history, particularly the history of African Americans in the South in the aftermath of the Civil War. The book should also be of interest to anyone with an appreciation for documentary photography, including students and teachers of photography.

Praise For The Upshaws of County Line: An American Family…

“There are giants in the earth and other 'presences' at County Line, and when you look closely at the photos of Orton perhaps you can sense some of them.”—from the Foreword by Thad Sitton

“This book reveals significance in the lives of ordinary people who, when closely examined, are not ordinary at all.”—O. Rufus Lovett, photographer for Weeping Mary

“Richard Orton’s camera has caught the culmination of 150 years of East Texas history in his Upshaws of County Line. This Nacogdoches family of Upshaws lived through the violence of slavery  and Reconstruction, and all the indignities of Jim Crow times and integration to maintain an independent Freedman’s Settlement in the Angelina River bottoms. Richard’s photographs reflect the Upshaws’ strength and endurance necessary for the survival of the County Line community through these harsh and bitter times. Richard’s pictures more importantly reflect the decades of love and respect that held that colorful family together for 150 years.” — F. E. Abernethy, Distinguished Professor Emeritus, Stephen F. Austin State University

“Orton’s book is a great tribute via words and photos to the study of African American history in Texas. It is a moving and powerful portrayal of the courageous people who started and settled the County Line community in East Texas. Anyone interested in the peoples of Texas will enjoy this book. It is a must read.” —Bruce Glasrud, co-editor, The African American Experience in Texas: An Anthology

"Richard Orton has served both today's reader and posterity well by creating these turn-of-the-twenty-first-century images of an American family, still influenced by the initiative of their nineteenth-century ancestors."--Southwestern Historical Quarterly

"Orton’s photos of the Upshaws are simple but intimate snapshots of their daily lives over the course of several years. They tell the story of a tight-knit family who have held firm to their roots despite death, change, and the push and pulls that lead people to move away or come back home. His photographs show the perspective not of an outsider but of someone immersed in their lives: joined in song at the piano, seated by the casket at a funeral, or with hands clasped mid-prayer in church."--Texas Monthly

RICHARD ORTON was born in Nacogdoches and raised in Midland. He became mesmerized by photography after seeing an image materializing in a development tray.  After two years in the Peace Corps, he settled in Austin, Texas, where he worked with nonprofits before becoming a photographer for the Texas House of Representatives. He moved back to Nacogdoches in 2007.
Loading...
or
Not Currently Available for Direct Purchase