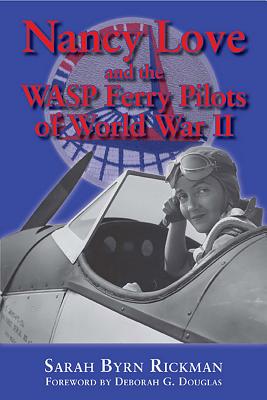 She flew the swift P-51 and the capricious P-38, but the heavy, four-engine B-17 bomber and C-54 transport were her forte. This is the story of Nancy Harkness Love who, early in World War II, recruited and led the first group of twenty-eight women to fly military aircraft for the U.S. Army.

Love was hooked on flight at an early age. At sixteen, after just four hours of instruction, she flew solo “a rather broken down Fleet biplane that my barnstorming instructor imported from parts unknown.” The year was 1930: record-setting aviator Jacqueline Cochran (and Love’s future rival) had not yet learned to fly, and the most famous woman pilot of all time, Amelia Earhart, had yet to make her acclaimed solo Atlantic flight.

When the United States entered World War II, the Army needed pilots to transport or “ferry” its combat-bound aircraft across the United States for overseas deployment and its trainer airplanes to flight training bases. Most male pilots were assigned to combat preparation, leaving few available for ferrying jobs. Into this vacuum stepped Nancy Love and her civilian Women’s Auxiliary Ferrying Squadron (WAFS).

Love had advocated using women as ferry pilots as early as 1940. Jackie Cochran envisioned a more ambitious plan, to train women to perform a variety of the military’s flight-related jobs stateside. The Army implemented both programs in the fall of 1942, but Jackie’s idea piqued General Hap Arnold’s interest and, by summer 1943, her concept had won. The women’s programs became one under the name Women Airforce Service Pilots (WASP), with Cochran as the Director of Women Pilots and Love as the Executive for WASP.

Nancy Love advised the Ferrying Division, which was part of the Air Transport Command, as to the best use of their WASP ferry pilots. She supervised their allocation and air-training program. She proved adept at organizing and inspiring those under her command, earning the love and admiration of her pilots. Her military superiors trusted and respected her, to the point that she became Ferrying Division commander Gen. William H. Tunner’s troubleshooter.

By example, Love won the right for women ferry pilots to transition into increasingly more complex airplanes. She checked out on twenty-three different military aircraft and became the first woman to fly several of them, including the B-17 Flying Fortress. Her World War II career ended on a high note: following a general’s orders, she piloted a giant C-54 Army transport over the fabled China-Burma-India “Hump,” the crucial airlift route over the Himalayas.

Nancy Love believed that the women attached to the military needed to be on equal footing with the men and given the same opportunities to prove their abilities and mettle. Young women serving today as combat pilots owe much to Love for creating the opportunity for women to serve. Her foresight and tenacity nearly seventy years ago helped ensure their future. Now author Sarah Byrn Rickman, aviation historian, presents the first full-length biography of Nancy Love and her role in the WAFS and WASP programs. Her book will appeal to all with a love of flight.

"This is an intimate account of an accomplished aviatrix and visionary pioneer whose contributions to women in military aviation were heretofore not fully acknowledged. Often overshadowed when referenced in comparison to Jackie Cochran, Nancy Love made her own indelible mark on history. Her story, insightfully chronicled and reverently told, is a must-read for all who relish courage, tenacity, and a fearless desire to serve our nation in time of its greatest need. Today's military pilots owe her a debt of gratitude for breaking the ground that allowed all members of future generations to serve."—Brig. Gen. Linda K. McTague, Air National Guard

"Nancy Love and the women she led were my role models. Reading this book, her life story, I found myself comparing yesterday's flying challenges and excitements with my own experiences. I could feel the essence of Nancy’s life: her love of flying, her leadership, her focus on the mission. I wanted to do what she was doing: flying, leading, making a contribution to our country’s future. Without her contributions, and those of other women pilots of her time, my generation would not have had the opportunities of military flying and spaceflight. I feel a sisterhood with Nancy Harkness Love, and am grateful to share in her experiences through this book."—Col. Eileen M. Collins, U.S. Air Force (Ret.), First Woman Space Shuttle Pilot and Commander

"For anyone interested in a wonderful story of aviation or wanting to know more about this famous woman, this book is a must-read."—Peggy Chabrian, President/Founder, Women in Aviation, International

"This is an 'edge of your seat' story even if you know the outcome. Sarah Byrn Rickman brings Nancy Love and Jackie Cochran back to life, and she re-creates their historical clash as the drama that it was, making it as real as if it were happening today. It's like observing a boxing match, one that evenly pits Nancy's 'ladylike' personality against Jackie’s 'brash' one.  While only one could 'win,' Sarah's portrayal of how these women 'played the game' is worthy of the best-seller list!"—Commander Trish Beckman, U.S. Navy (Ret.)

"Sarah Rickman tells this story in the exciting style of the journalist she once was. … The writing is so fresh, you often have the sense that you are discovering new things about Love right along with the author. … Rickman has done her subject justice; this is a book rich in insight and opportunity."—From the Foreword by Deborah G. Douglas, Curator, Massachusetts Institute of Technology Museum

"A trailblazing figure for women's service in the military along with her rival Jacqueline Cochran, Nancy Love was a dedicated and determined aviation enthusiast and served admirably as the Executive for the unified women's programs under the name Women Airforce Service Pilots (WASP). Extensive notes, a glossary of military and airplane terms, and an index round out this captivating biography of a truly extraordinary woman aviator."--Midwest Book Review

Sarah Byrn Rickman left her newspaper editor job in 1989 to write books. A Masters in Creative Writing, coupled with access to the WASP and WAFS through her freelance job with the International Women’s Air and Space Museum, produced first an award-winning WASP novel, Flight from Fear , and then The Originals: The Women’s Auxiliary Ferrying Squadron of World War II. While writing The Originals, Rickman came to realize the need for founder Nancy Love’s biography. Rickman was awarded the Seventh Annual Combs Gates Award by the National Aviation Hall of Fame for her outstanding work on the women pilots of World War II.