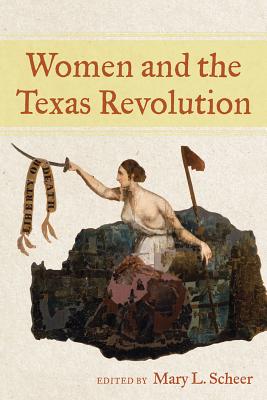 Women and the Texas Revolution

Winner of the Liz Carpenter Award for Research in the History of Women, Texas State Historical Association

Historically, wars and revolutions have offered politically and socially disadvantaged people the opportunity to contribute to the nation (or cause) in exchange for future expanded rights. Although shorter than most conflicts, the Texas Revolution nonetheless profoundly affected not only the leaders and armies, but the survivors, especially women, who endured those tumultuous events and whose lives were altered by the accompanying political, social, and economic changes.

While there is wide scholarship on the Texas Revolution, there is no comparable volume on the role of women during that conflict. Most of the many works on the Texas Revolution include women briefly in the narrative, such as Emily Austin, Susanna Dickinson, and Emily Morgan West (the Yellow Rose), but not as principal participants. Women and the Texas Revolution explores these women in much more depth, in addition to covering the women and children who fled Santa Anna’s troops in the Runaway Scrape, and examining the roles and issues facing Native American, black, and Hispanic women of the time.

Like the American Revolution, women’s experiences in the Texas Revolution varied tremendously by class, religion, race, and region. While the majority of immigrants who crossed the Sabine and Red rivers into Texas in the 1820s and 1830s were men, many were women who accompanied their husbands and families or, in some instances, braved the dangers and the hardships of the frontier alone. Black and Hispanic women were also present in Mexican Texas. Most black women came as chattel property (or free blacks) and most Tejanas were already living in predominantly Spanish or Mexican communities. The Native American female population, a sizeable but declining segment of the population, was also in the region, inhabiting the prairies and plains, but rarely counted in the various censuses at the time. Whether Mexican loyalist or Texas patriot, elite planter or subsistence farm wife, slaveholder or slave, Anglo or black, women helped settle the Texas frontier and experienced the uncertainty, hardships, successes, and sorrows of the Texas Revolution.

By placing women at the center of the Texas Revolution, this volume reframes the historical narrative and asks different questions: What were the social relations between the sexes at the time of the Texas Revolution? Did women participate in the war effort? Did the events of 1836 affect Anglo, black, Hispanic, and Native American women differently? What changes occurred in women’s lives as a result of the revolution? Did the revolution liberate women to any degree from their traditional domestic sphere and threaten the established patriarchy? In brief, was the Texas Revolution “revolutionary” for women?


Praise For Women and the Texas Revolution…

“Women and the Texas Revolution is a fresh and valuable addition to works on the Revolution and on women in nineteenth-century Texas. It is a serious and multifaceted treatment of a topic that has come in for very little scholarly study.”—Paula Marks, author of Hands to the Spindle and Precious Dust

“The gathering of scholars in this book is formidable. They have produced a well-done series of well documented vignettes of women in the revolutionary period, whether defined by ethnicity, as in African-American, or by fate (as in Alamo survivors, or participants in the Runaway Scrape).”—James L. Haley, author of Sam Houston and Passionate Nation

MARY L. SCHEER is an associate professor and chair of the history department at Lamar University in Beaumont, Texas. She is also a former Fulbright Scholar to Germany. Scheer has authored The Foundations of Texan Philanthropy and co-edited with John Storey Twentieth-Century Texas: A Social and Cultural History (UNT Press). Her research interests include Texas, women, and twentieth-century social history.