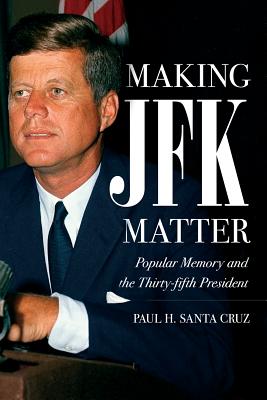 Popular Memory and the Thirty-fifth President

In Making JFK Matter, Paul Santa Cruz examines how popular memory of John F. Kennedy has been used politically by various interest groups, primarily the city of Dallas, Lyndon Johnson, and Robert Kennedy, as well as how the memory of Kennedy has been portrayed in various museums. Santa Cruz argues that we have memorialized JFK not simply out of love for him or admiration for the ideals he embodied, but because invoking his name carries legitimacy and power. Memory can be employed to accomplish particular ends: for example, the passage of long overdue civil rights legislation, or even successfully running for political office.

Santa Cruz demonstrates the presence and use of popular memory in an extensive analysis of what was being said, and by whom, about the late president through White House memoranda and speech material, museum exhibits (such as the Sixth Floor Museum in Dallas and the JFK Presidential Library and Museum in Boston), public correspondence, newspapers and periodicals of the time, memoirs, and archival research. He also explores how JFK has been memorialized in films such as Bobby, JFK, and Thirteen Days. Written in an accessible manner to appeal to both historians and the general public, Making JFK Matter tells us much of how we have memorialized Kennedy over the years.

“Making JFK Matter reminds us that bringing new methodologies to known topics can yield insights that are genuinely fresh and thought-provoking.  By considering JFK’s legacy not in terms of what the President did in his lifetime, but rather as a ‘site of memory’ created after his death, Paul Santa Cruz does just that. His fascinating study shows that when public leaders honored and mobilized the memory of the assassinated President to achieve their own political aims, their memorial work had additional, far-reaching cultural effects, creating a powerful image of what an American President should be in ways that are still with us today.”—Lisa Moses Leff, author of The Archive Thief: The Man Who Salvaged French Jewish History in the Wake of the Holocaust

"No book covers JFK's popular memory as comprehensively as Paul Santa Cruz does. He explains multiple aspects of how the memory of Kennedy's life and death has been exploited and distorted to accommodate political and personal needs."—James N. Giglio, author of The Presidency of John F. Kennedy

"Making JFK Matter is written in an accessible, balanced, and frequently page-turning style. I enjoyed Santa Cruz's incisive analysis, which is leavened with a healthy dose of common sense. This is a useful political history full of insights about how the contested ground of John F. Kennedy's 'legacy' has been used and misused over time—often in ways that affect us in the real world."—Benjamin Hufbauer, author of Presidential Temples: How Memorials and Libraries Shape Public Memory

"Noting that John F. Kennedy has been remembered in an overwhelmingly positive manner by the American public compared to the way he has been judged by the historical community, Santa Cruz proves that popular memory is often an expression of what we want to remember and believe instead of historical fact. A provocative take on a topic that has been exhaustively studied."--Library Journal

"Santa Cruz uses individual case studies of the city of Dallas, Texas, President Lyndon B. Johnson, and Robert F. Kennedy to show how the 'practical quality' of public memory is often used for political ends. . . . [H]is book provides a good starting point and will be especially useful to scholars interested in public history."--Journal of Southern History