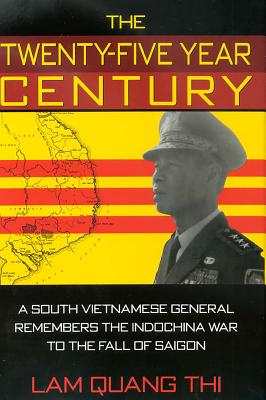 General Thi served in the Vietnamese National Army, also known as the Army of the Republic of Viet Nam (or ARVN). His last position was commander of an Army Corps Task Force south of the Demilitarized Zone. He fought for twenty-five years in Vietnam until Saigon fell in 1975. Here he provides a rare and valuable insight into South Vietnam’s side of the Vietnam War. General Thi pulls no punches in his denunciation of the various regimes of the Republic, and of the complacency and arrogance toward Vietnam in the policies of both France and the United States.

Praise For The Twenty-five Year Century: A South Vietnamese General Remembers the Indochina War to the Fall of Saigon…

“His narrative is a stunning portrayal of the gradual collapse of South Vietnam . . . replete with tales of heroism, treachery, and political intrigue and corruption. . . . This is a must-read book.” —Proceedings

“A vivid, first-hand account. . . . Thi is also brutally frank in his assessment of South Vietnam’s fall, but he does not fall into the ‘how we might have won’ syndrome. He lays part of the blame on America’s failure to provide promised support, but he also acknowledges South Vietnam’s shortcomings, which contributed to the defeat.”—Military Review

LAM QUANG THI, a general in the ARVN, is the author of Hell in An Loc: The 1972 Easter Invasion and the Battle That Saved South Viet Nam, also published by UNT Press.
Loading...
or
Not Currently Available for Direct Purchase