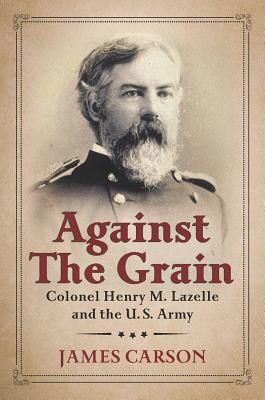 Henry Martyn Lazelle (1832–1917) was the only cadet in the history of the US Military Academy to be suspended and sent back a year (for poor grades and bad behavior) and eventually return as Commandant of the Corps of Cadets. After graduating from West Point in 1855, he scouted with Kit Carson, was wounded by Apaches, and spent nearly a year as a “paroled” prisoner-of-war at the outbreak of the Civil War. Exchanged for a Confederate officer, he took command of a Union cavalry regiment, chasing Mosby’s Rangers throughout northern Virginia.

Lazelle’s service was punctuated at times with contention and controversy. In charge of the official records of the Civil War in Washington, he was accused of falsifying records, exonerated, but dismissed short of tour. As Commandant of Cadets at West Point, he was a key figure during the infamous court martial of Johnson Whittaker, one of West Point’s first African American cadets. Again, he was relieved of duty after a bureaucratic battle with the Academy’s Superintendent.


Praise For Against the Grain: Colonel Henry M. Lazelle and the U.S. Army (North Texas Military Biography and Memoir Series #9)…

“Henry Lazelle was involved in two of the most significant controversies of late nineteenth-century American military history: the sensational court-martial of Johnson Whittaker, a black cadet at West Point; and the preparation and publication of the War of the Rebellion series, which has become a staple for scholars of the Civil War. This biography of Lazelle provides unique new insights into the multi-purpose army of the late nineteenth century.”—Robert Wooster, author of The Military and United States Indian Policy 1865-1903

“Lazelle is a highly eccentric figure in military biography. His career intersected army duties or service that military historians rarely read about. Carson’s discussion of Lazelle’s command of the office charged with compiling, editing, and publishing the War of the Rebellion record is eye-opening, for most historians never think about how the Army compiled the OR and how officers and clerks assigned to it had to negotiate treacherous political currents in Washington, D.C., to publish the many volumes of Confederate and Union military documents. Indeed, a controversy over a published muster roll led to Lazelle’s early dismissal from the office and his return to frontier duty in Texas with his regiment.”—Durwood Ball, author of Army Regulars on the Western Frontier


"A model of an exceptionally well researched and written military biography from beginning to end. . . . Especially commended to the attention of non-specialist general readers with an interest in the American Civil War."--Midwest Book Review

"Written with the detail and discipline of a scholar, the book examines Lazelle's exploits chasing Mosby's Rangers throughout Northern Virginia, brutal operations against the Apaches in the Southwest, and the infamous court martial of an African-American cadet at West Point."--Catholicherald.com

"Civil War students will find this book of substantial value for its revealing view of Army life before, during, and after the war."--Civil War News

"The author has accessed scores of primary sources to construct a well-written biography of his great-grandfather. All those interested in the U.S. Army during the second half of the nineteenth century will greatly enjoy reading Against the Grain."--Journal of America's Military Past

"[Carson] penned a compelling narrative. Lazelle's experience as a Confederate prisoner exchange agent was informative, and so too the horrific story of Cadet Whittaker's hazing at West Point and the squabbles in the Official Records office."--Nebraska History

"Those interested in the Civil War or memory studies will also find [Carson's] discussion of the creation of the conflict's premier primary source an intriguing example of the politics surrounding remembrance."--Southwestern Historical Quarterly

"Full of interesting photographs and drawing on family papers and records not previously available to historians, Carson's thorough biography is a worthwhile read for both Civil War and nineteenth-century military historians."--Journal of Southern History

"The author reinforces many well-established conceptions of the Army during the late nineteenth century as an institution dominated by strong personalities who generated controversy."--New Mexico Historical Review

"[Carson's] page-turning prose, in concert with well-organized chapters, uncovers little known relationships. By injecting well-researched and well-presented familiarity as it relates to the likes of Zachary Taylor, James Longstreet, John S. Mosby, and Joshua Chamberlain, Carson not only tells a great story but masterfully uses snapshots in time to relate how Lazelle's existence as an Army officer had impact on history."--On Point: The Journal of Army History

"Readers will be fascinated to learn that the successes and failures of army officers were often determined more by the whims of higher-ranking commanders and politicians than by dutiful service, merit, and bravery."--Great Plains Quarterly

"Against the Grain is a fine effort and succeeds at bringing to life a largely unknown US Army officer. It would be a welcome supplemental reading to any introductory or intermediate course covering the nineteenth-century United States, US West, Civil War, or general US military history."--H-WAR

JAMES CARSON has more than thirty years of experience as a military intelligence analyst, manager, and educator. He received his MA in International Studies from George Washington University and is a graduate of the Army Command and Staff College. He lives in Vienna, Virginia.
Loading...
or
Not Currently Available for Direct Purchase