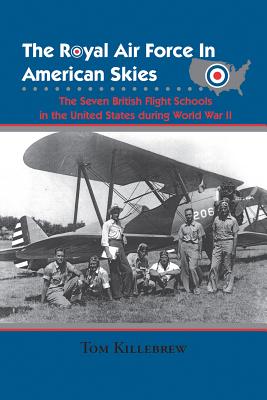 By early 1941, Great Britain stood alone against the aerial might of Nazi Germany and was in need of pilots. The Lend-Lease Act allowed for the training of British pilots in the United States and the formation of British Flying Training Schools. These unique schools were owned by American operators, staffed with American civilian instructors, supervised by British Royal Air Force officers, utilized aircraft supplied by the US Army Air Corps, and used the RAF training syllabus.

Tom Killebrew provides the first comprehensive history of all seven British Flying Training Schools located in Terrell, Texas; Lancaster, California; Miami, Oklahoma; Mesa, Arizona; Clewiston, Florida; Ponca City, Oklahoma; and Sweetwater, Texas. The British students attended classes and mastered the elements of flight day and night. Some students flushed out, while others were killed during training mishaps and are buried in local cemeteries. Those who finished the course became Royal Air Force pilots. These young British students would also forge a strong and long-lasting bond of friendship with the Americans.


Praise For The Royal Air Force in American Skies: The Seven British Flight Schools in the United States during World War II…

“This will be a valuable contribution to the historiography of WWII aviation training.”—Stephen Craft, Embry-Riddle at War: Aviation Training during World War II

“Tom Killebrew, through years of relentless dedication and diligence in researching the background, inception, birth, and death of one of the virtually least known but critically important pieces of American World War II history, deserves praise for his latest book, The Royal Air Force in American Skies. The tome is a well-organized and comprehensive, documented look at the vast number of reasons that ultimately brought about the arrival of Royal Air Force pilot trainees to the United States where they later trained side-by-side with their American counterparts, before returning to their homeland to defend their beloved country. It is full of first-hand recollections of the young Brits, their various phases of training, their camaraderie, friendships, losses and what we like to call ‘the rest of the story.’  The book is a catalyst which will stir the emotions of both young and old who carry a sense of patriotic pride, no matter the country of their birth.”—Paula Carmack Denson, author of The Royal Air Force in Oklahoma

"The strength of this book is its overview of the training process for RAF airmen from the long voyage over to the United States to their graduation and return home. Killebrew effectively uses questionnaires to demonstrate the difficulties young trainees faced when adapting to flight training and American culture. . . . Overall, the book is a worthwhile and well-written volume."--Southwestern Historical Quarterly

"Perhaps most importantly, [Killebrew] provides an insight into how the British, who were at war, and Americans, who were technically neutral, worked together to establish training programs without violating the United States' neutrality laws. . . . One may safely assume that Killebrew has provided the definitive study of the BFTS."--Military History of the West

"Tom Killebrew has written a carefully researched and engaging study of the evolution of the BFTS training program, with due attention to operational conflicts and problems. . . . [H]e has perceptively chronicled a vital cooperative venture in the Allied air war campaign. The Royal Air Force in American Skies is now the best work on a forgotten, yet crucial chapter in the history of the Second World War."--Michigan War Studies Review

"Tom Killebrew has written a superb study of these schools, and while it is not the first book to examine the issue, it is the first to consider the program as a whole."--Air & Space

"This is a fine volume on an unknown topic that needed to be explored. It is readable, sometimes inspiring and almost always interesting. Who could ask for more?"--Journal of America's Military Past

"There have been previous essays on the BFTSs but none as comprehensive as this and it is unlikely to be surpassed in the future."--Royal Air Force Historical Society Journal

"[Killebrew] paints a vivid and precise picture of the history of the project, the bases themselves, and the experiences of the air crew who were trained, as well as shedding light on their interactions with Americans of the neighboring communities. . . . The book provides a valuable window on an interesting aspect of World War II, of US-British relations, and of aviation history."--U.S. Military History Review

"The book captures the intrinsic difficulties of training pilots in a time of war and the risks involved."--Review of Texas Books

TOM KILLEBREW received a master’s degree in history from the University of Texas at Arlington and taught American history at Navarro College in Waxahachie, Texas. He is the author of The Royal Air Force in Texas: Training British Pilots in Terrell during World War II (UNT Press). He lives in Erath County, Texas.
Loading...
or
Not Currently Available for Direct Purchase