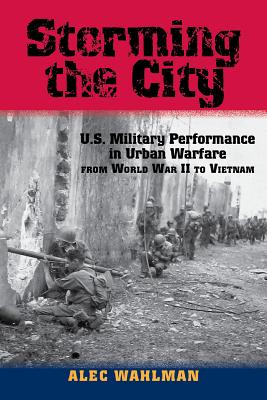 In an increasingly urbanized world, urban terrain has become a greater factor in military operations. Simultaneously, advances in military technology have given military forces sharply increased capabilities. The conflict comes from how urban terrain can negate or degrade many of those increased capabilities. What happens when advanced weapons are used in a close-range urban fight with an abundance of cover?

Storming the City explores these issues by analyzing the performance of the US Army and US Marine Corps in urban combat in four major urban battles of the mid-twentieth century (Aachen 1944, Manila 1945, Seoul 1950, and Hue 1968). Alec Wahlman assesses each battle using a similar framework of capability categories, and separate chapters address urban warfare in American military thought.

In the four battles, across a wide range of conditions, American forces were ultimately successful in capturing each city because of two factors: transferable competence and battlefield adaptation. The preparations US forces made for warfare writ large proved generally applicable to urban warfare. Battlefield adaptation, a strong suit of American forces, filled in where those overall preparations for combat needed fine tuning. From World War II to Vietnam, however, there was a gradual reduction in tactical performance in the four battles.

“Alec Wahlman has rendered an important contribution to our understanding of the problems involved in U.S. forces fighting in cities. Given the increasing move of the world's population into urban environments, this is an important book for policy makers and soldiers alike.”—Williamson Murray, author of The Path to Ruin and co-author of A War To Be Won, Fighting the Second World War

“The United States is slowly coming to grips with the changing nature of military operations. The romantic image of battles in wide-open plains and deserts is being shattered by the new reality of urban combat. Wahlman comprehensively evaluates each case study and then considers them in total—a solid study. Military officers and cadets will all find this work informative and helpful in understanding the changing nature of military operations. I expect to find this on several recommended reading lists among military branches and services. Political decision makers also need to understand the complexity of fighting in an urban environment.”—Stephen A. Bourque, co-author of The Road to Safwan

“This is a very serious and well executed work. The quantity of knowledge packed into these pages is immense, with conclusions closely tied to the declared purposes of this study and strongly supported by abundant evidence; this book has real value.”—Anthony James Joes, author of ResistingRebellion and Victorious Insurgencies

“At a moment when urban conflict has replaced maneuver battles and decisive victories in the field as the dominant form of war, Alec Wahlman’s insightful study of city-fighting throws new light on a much-neglected aspect of the past and opens up a loop-hole through which we can peer into a likely future.”—John Gooch, author of Mussolini and His Generals

"It is a text for everyone, from general war buff, cadet, grunt, military enthusiast, or military professional--the author's research results adding copiously to our knowledge on how to fight, if necessary, from room to room in an enemy city."--Leatherneck Magazine

"Should be required reading for anyone concerned with the future of warfare in the 21st century. . . . Urban warfare has increased steadily in importance, and yet has traditionally been neglected with respect to developing doctrine. This book is a welcome contribution toward shedding more light on the subject."--Defense Media Network

"An unexpectedly readable, interesting, and well-written examination of exactly what the subtitle imports. . . . . [T]he book examines how 'transferable competence' and 'battlefield adaptation' were key in capturing each city--and how the ability of the military to accomplish this has degraded over time. . . . The writing is excellent, economical, tactical, and, amazingly, readably technical."--Library Journal

"This is an excellent book and it should be read by doctrine thinkers and people that think all city fights are slow motion slugfests with an invisible enemy as has been the contemporary norm. . . . A great book that I highly recommend."--Battles and Book Reviews

"For a study focusing on the relatively recent advent of American forces fighting in built-up urban areas, this is a needed contribution, given the many cities, particularly in Iraq, which have been devastated in an attempt to win people's hearts and minds."--Journal of America's Military Past

"Wahlman's research claims to undermine two myths about urban warfare. First, the attacking force's 'traditional' three-to-one manpower advantage was proved unnecessary. Americans had only a three-to-two advantage in Manila, and at Aachen the Germans actually outnumbered Americans by three-to-one. The second myth is that urban fighting is an infantry job. Wahlman challenges that by saying that infantry 'is most effective when part of a combined arms team,' which relates to his transferable competence argument."--VVA Books

"Wahlman's thorough and thoughtful analyses hold appeal for military leaders as well as academic readers. What will stand out to an Army staff officer in particular are the frameworks used by Wahlman to examine each battle. . . . When showing the comparison of the strengths and weaknesses of each battle through the warfighting functions, the criteria are listed within charts that are identical to course of action comparisons in the military decision-making process. For this and other reasons, any combat arms staff officer will surely appreciate Wahlman's work."--US Military History Review

"Understanding and applying [Wahlman's] model to recent battles fought in Iraq and Afghanistan would not only aid historians, but would prove useful for current or future planning efforts, supporting increased command and staff effectiveness during the run-up to urban fighting and possibly resulting in fewer military and civilian casualties and with less collateral damage to urban area infrastructure."--Marine Corps History

"Narratives of each battle are engaging, offer excellent context for the specific episodes amidst the wider conflicts, and flow seamlessly into analysis on dimensions of U.S. forces' performance in command, control, and communications; intelligence and reconnaissance; firepower and survivability; logistics; and dealing with the population."--Journal of Military History

"Alec Wahlman is right to stress the benefits of modeling and simulations in grasping the intricacies of urban warfare. Still, the record of American forces in Iraq and Afghanistan makes it painfully clear that, despite their adaptability to conditions of urban terrain, such combat should be kept to a minimum."--Michigan War Studies Review

ALEC WAHLMAN has been an analyst for fourteen years at the Institute for Defense Analyses, a Federally Funded Research and Development Center that works primarily with the Department of Defense. He earned his PhD in military history from the University of Leeds (UK) and lives in Falls Church, Virginia.
Loading...
or
Not Currently Available for Direct Purchase