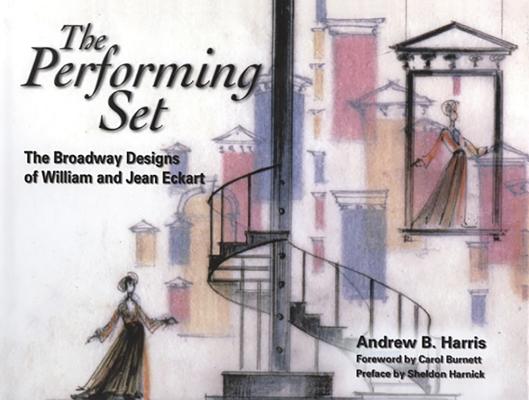 The Broadway Designs of William and Jean Eckart

The large-scale Broadway musical is one of America's great contributions to world theatre. Bill and Jean Eckart were stage designers and producers at the peak of the musical, and their designs revolutionized Broadway productions. At a time when sets were meant to remain simply backdrops that established time and place but not much else, an Eckart set became part of the performance on stage, equal at times to an actor. Anyone who has seen Phantom of the Opera or Les Miserables has seen the innovations that the Eckarts brought to the large Broadway-style musical production. They were best known for their designs for Damn Yankees (1955); Once Upon a Mattress (1959), in which Carol Burnett made her Broadway debut; and Mame (1966) with Angela Lansbury.

Andrew B. Harris uses production stills and the Eckarts’ sketches from every show they worked on to illustrate the magic behind an Eckart design. This lavishly illustrated book, with more than 500 full-color illustrations, is a fitting tribute to both the great American theatre and the couple who helped make it great.

Praise For The Performing Set: The Broadway Designs of William and Jean Eckart…

“The show that Jean and Bill offered me gave me my big break. And so they were not just brilliant designers and producers, but also really good friends.”—Carol Burnett, actor and star of television and Once Upon a Mattress on Broadway

“The sets for Mame were the first of the really magnificently choreographed sets. The furniture and the set pieces moved on and off without breaking the flow of the action. We never needed the curtain to come down for a change of scenery. It never stopped. Everything was just so fluid and marvelous.”—Angela Lansbury, actor

“Chock full of new and valuable information and which in my opinion will be an important book on the history of the American musical. I found it an excellent précis of the theatrical process and one which brilliantly shows the collaborative aspects of design.”—Robert Taylor, curator of The New York Public Library for the Performing Arts

Andrew B. Harris is the author of the award-winning BroadwayTheatre and a stage director, playwright, and producer. He has chaired theatre departments at Columbia University, Texas Christian University, and Southern Methodist University, where he met William and Jean Eckart. He lives in McKinney, Texas.
Loading...
or
Not Currently Available for Direct Purchase