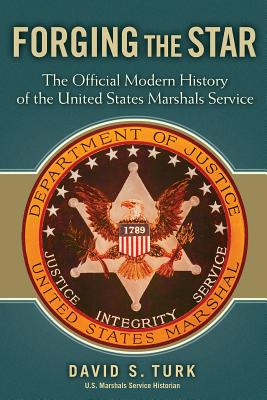 The Official Modern History of the United States Marshals Service

What do diverse events such as the integration of the University of Mississippi, the federal trials of Teamsters President Jimmy Hoffa, the confrontation at Ruby Ridge, and the aftermath of Hurricane Katrina have in common? The U.S. Marshals were instrumental in all of them. Whether pursuing dangerous felons in each of the 94 judicial districts or extraditing them from other countries; protecting federal judges, prosecutors, and witnesses from threats; transporting and maintaining prisoners and detainees; or administering the sale of assets obtained from criminal activity, the U.S. Marshals Service has adapted and overcome a mountain of barriers since their founding (on September 24, 1789) as the oldest federal law enforcement organization.

In Forging the Star, historian David S. Turk lifts the fog around the agency’s complex modern period. From the inside, he allows a look within the storied organization. The research and writing of this singular account took over a decade, drawn from fresh primary source material with interviews from active or retired management, deputy U.S. marshals who witnessed major events, and the administrative personnel who supported them. Forging the Star is a comprehensive official history that will answer many questions about this legendary agency.


Praise For Forging the Star: The Official Modern History of the United States Marshals Service…

“Turk advances our understanding of the U.S. Marshals Service into the modern era, heretofore a time generally overlooked, and he does it admirably.”—Bob Alexander, former special agent with the U.S. Treasury Department and author of Rawhide Ranger, Ira Aten, and Six-Shooters and Shifting Sands

“The U.S. Marshals are an understudied but vital part of federal law enforcement today. The author’s inclusion of stories from actual Marshals involved in historic events puts a personal touch on both the Marshals themselves and on the events.”—Lorie Rubenser, co-author of Constables, Marshals, and More

“This articulate, interesting, and factual account of the history and foundations of the oldest law enforcement agency at the federal level is a must read for those that embellish American history and those that enforce the law. From the early days of the great James McShane to more recent days with the demands of the U.S. Marshal's Service's multi-faceted global operations, this well written text commands the reader’s attentiveness. The men and women who have served in the roles of command or law enforcement service for the safety of America with the Marshals Service will be proud of the work that has been done with this detailed story of the forging of the star. Highly recommended reading!”—Frank Jones, Professor of Criminal Justice, New England College

"Forging the Star is a well-researched book that will interest students of crime as well as students of history."--The Washington Times

"Turk takes the reader on an informative, easy-to-read round-up of federal marshal activities through the decades, covering the marshals' roles in such events as the American Indian Movement's takeover of Alcatraz and occupation of Wounded Knee, the kidnapping and trial of Patty Hearst, the integration of the University of Mississippi, the trials of International Brotherhood of Teamsters President Jimmy Hoffa, Watergate, various hostage negotiations, transportation of prisoners and administration of the Witness Protection Program."--Wild West

"The most compelling stories deal with the Marshals and the troubles of desegregation and the Civil Rights era. Marshals were given the job of enforcing integration of southern schools in the face of fierce and sometimes violent resistance. . . . Dozens of stories are related in Forging the Star and suffice to say that the book is a well-researched, detailed account of the Marshals Service of the twentieth- and twenty-first centuries."--Fort Smith Historical Society Journal

"David S. Turk has produced an outstanding history of the service, covering its 'modern' story from the 1920s to the present."--New Mexico Historical Review

"The brilliance of Turk’s writing is that he tells the human-interest stories that shaped the United States Marshals Service rather than just providing a chronology of critical events in history. He highlights the hard work and commitment of each marshal in the story, and elaborates on the relationships between colleagues in the Marshals Service and other agencies. This modern history of the USMS will be a critical reference for anyone interested in learning more about the origin and development of a federal law enforcement agency."--H-FedHist, H-Net Reviews

"Forging the Star is bound to endure as the definitive modern history of the US Marshals Service."--Chronicles of Oklahoma

DAVID S. TURK is Historian of the United States Marshals Service. He serves on the U.S. Marshals Museum Board and maintains responsibility for the agency’s historical programs. Turk is the author of five books, including one relating to the outlaw Billy the Kid, Blackwater Draw. He lives in Woodbridge, Virginia.
Loading...
or support indie stores by buying on
(This book is on backorder)