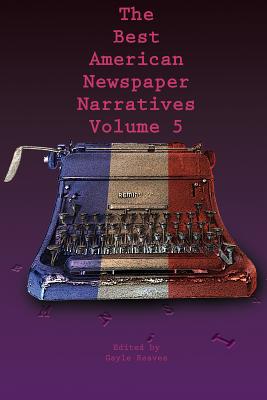 This anthology collects the ten winners of the 2016 Best American Newspaper Narrative Writing Contest at the Mayborn Literary Nonfiction Conference, an event hosted by the Frank W. Mayborn Graduate Institute of Journalism at the University of North Texas.

First place winner: Terrence McCoy, “It Was an Accident, Baby” (The Washington Post), relates how a family in Alabama coped after the family’s four-year-old accidentally killed his nine-year-old sister.
Second place: Hannah Dreier, “A Child’s Scraped Knee” (Associated Press), which depicts how medical supply shortages in Venezuela turned a simple injury into a life-threatening condition for a three-year-old.

Third place: Billy Baker, “The Power of Will” (The Boston Globe), focuses on a family’s search for a cure for their son’s rare form of cancer, which led them to a maverick doctor.
Runners-up include John Woodrow Cox, “A Marine’s Conviction” (The Washington Post); Christopher Goffard, “Framed” (The Los Angeles Times); Steve Thompson, “The Long Way Home” (The Dallas Morning-News); N. R. Kleinfield, “Fraying at the Edges” (The New York Times); Anna Kuchment and Steve Thompson, “Seismic Denial” (The Dallas Morning-News); Lauren Caruba, “55 Minutes” (The Houston Chronicle); and Lisa Wangsness, “In Search of Sanctuary” (The Boston Globe).

"The winning writings have a way of striking into the heart of relationships, social issues around the world, and personal experiences that are microcosms of broader issues. These newspaper narratives represent the pinnacles of media reporting excellence and should serve as sterling examples for aspiring students of news reporting and media approaches."--Midwest Book Review

GAYLE REAVES was a projects reporter and assistant city editor for The Dallas Morning News, where she was part of the team that won the 1994 Pulitzer Prize in International Reporting and in 1990, with two colleagues, received the George Polk Award.
Loading...
or
Not Currently Available for Direct Purchase