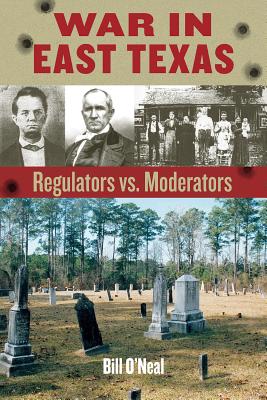 From 1840 through 1844 East Texas was wracked by murderous violence between Regulator and Moderator factions. More than thirty men were killed in assassinations, lynchings, ambushes, street fights, and pitched battles. The sheriff of Harrison County was murdered, and so was the founder of Marshall, as well as a former district judge. Senator Robert Potter, a signer of the Texas Declaration of Independence, was slain by Regulators near his Caddo Lake home. Courts ceased to operate and anarchy reigned in Shelby County, Panola District, and Harrison County. Only the personal intervention of President Sam Houston and an invasion of the militia of the Republic of Texas halted the bloodletting.

The Regulator-Moderator War was the first and largest of the many blood feuds of Texas. Bill O’Neal includes rosters of names of the Regulator and Moderator factions arranged by the counties in which the individuals were associated, along with a roster of the victims of the war.


Praise For War in East Texas: Regulators vs. Moderators…

“O’Neal has done a very good job of keeping track of the many people who were involved in the complicated series of events of the Regulator-Moderator War. He has also explained the part played by Sam Houston and the Texas Militia in quelling this feud.”—Donaly E. Brice, author of The Great Comanche Raid and coauthor of The Governor's Hounds: The Texas State Police, 1870-1873

""Reading with all the riveting intensity of a western novel, War in East Texas is impressively researched, written, organized and presented, making it an essential and core addition to personal reading lists."--Midwest Book Review

"O'Neal crafts a masterful story of the deadliest feud in Texas history. . . . War in East Texas is a crucial addition to any student of Texana or frontier violence."--The Tombstone Epitaph

"O'Neal . . . weaves a masterful tale of death and violence in an oft-overlooked section and period of the republic. He provides context for the violence in Shelby and Harrison Counties, showing the historical uses of regulating and blood feuds in American and, more specifically, southern history."--Journal of Southern History

"The Texas Regulators vs. Moderators was the largest blood feud in the Old West. . . . The writing is smooth and compact, drawing the reader on as if you are turning the pages of an exciting adventure novel."--Chronicle of the Old West

BILL O’NEAL is State Historian of Texas and the author of more than thirty books, including The Johnson-Sims Feud, The Johnson County War (2005 NOLA Book of the Year), Historic Ranches of the Old West, Encyclopedia of Western Gunfighters, and Cheyenne, 1867–1903. He is retired from teaching at Panola College.
Loading...
or
Not Currently Available for Direct Purchase