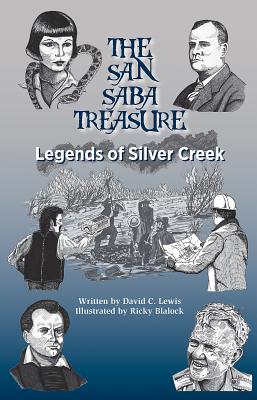 In 1868, four treasure hunters from San Marcos, Texas, searched for a lost mine on the San Saba River, near today’s Menard. It was popularized as folklore in J. Frank Dobie’s treasure legend classic Coronado’s Children. One hundred and fifty years later, a descendant of one of those four men set out to discover the history behind the legend. This book recounts that search, from the founding of the ill-fated 1757 mission on the San Saba River up to the last attempt, in 1990, to find the treasure in this particular legend. It describes Jim Bowie, a fake treasure map industry, murder trials, a rattlesnake dancer, fortunes lost, a very long Texas cave, and surprising twists to the story popularized by Dobie.

The book will not lead anyone to the legendary ten-thousand pounds of silver, but it will open a treasure trove of Texas history and the unique characters who hunted the fabulous riches.

"Many colorful and unique characters who searched for the fabulous riches are found in subsequent chapters, which included James Bowie (of the Alamo fame) who formed an expedition in search of the mine, a fake treasure map industry, murder trials, lost fortunes, a rattlesnake dancer (a 'Comanche' princess), and numerous others."--English Westerners Society Tally Sheet

"Lewis contributes background on the immense societal and folkloric appeal of legend and plausible tales of treasure for nineteenth- and twentieth-century Americans. Future Alamo defender Jim Bowie and his older brother were among the earliest Americans to take up the search for lost treasure on the San Saba."--Southwestern Historical Quarterly

An ancestor of Sam Fleming, one of the 1868 San Marcos treasure hunters, DAVID C. LEWIS developed an interest in Old West history while growing up near Carlsbad, New Mexico. He received degrees in Industrial Engineering from New Mexico State University. He currently resides in Kentucky with his wife and three children.
Loading...
or
Not Currently Available for Direct Purchase