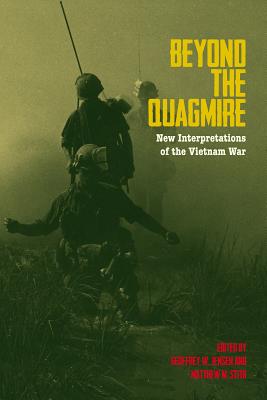 New Interpretations of the Vietnam War

In Beyond the Quagmire, thirteen scholars from across disciplines provide a series of provocative, important, and timely essays on the politics, combatants, and memory of the Vietnam War.
Americans believed that they were supposed to win in Vietnam. As veteran and Pulitzer Prize-winning author Philip Caputo observed in A Rumor of War, “we carried, along with our packs and rifles, the implicit convictions that the Viet Cong would be quickly beaten and that we were doing something altogether noble and good.” By 1968, though, Vietnam looked less like World War II’s triumphant march and more like the brutal and costly stalemate in Korea. During that year, the United States paid dearly as nearly 17,000 perished fighting in a foreign land against an enemy that continued to frustrate them.  Indeed, as Caputo noted, “We kept the packs and rifles; the convictions, we lost.”
It was a time of deep introspection as questions over the legality of American involvement, political dishonesty, civil rights, counter-cultural ideas, and American overreach during the Cold War congealed in one place: Vietnam. Just as Americans fifty years ago struggled to understand the nation’s connection to Vietnam, scholars today, across disciplines, are working to come to terms with the long and bloody war—its politics, combatants, and how we remember it.
The essays in Beyond the Quagmire pose new questions, offer new answers, and establish important lines of debate regarding social, political, military, and memory studies. The book is organized in three parts. Part 1 contains four chapters by scholars who explore the politics of war in the Vietnam era. In Part 2, five contributors offer chapters on Vietnam combatants with analyses of race, gender, environment, and Chinese intervention. Part 3 provides four innovative and timely essays on Vietnam in history and memory.  In sum, Beyond the Quagmire pushes the interpretive boundaries of America’s involvement in Vietnam on the battlefield and off, and it will play a significant role in reshaping and reinvigorating Vietnam War historiography.


Praise For Beyond the Quagmire: New Interpretations of the Vietnam War…

“The list of authors is very strong, the research is well documented, and the topics addressed are timely. This will be a valuable and significant addition to the historiography of the war.”—James Willbanks, author of Abandoning Vietnam and The Tet Offensive

“Beyond the Quagmire examines the war in a fresh and provocative new light. The essays are quite absorbing and many are provocative, challenging traditional viewpoints. I really enjoyed reading it.”—James Westheider, author of Fighting in Vietnam

“A finely conceived, wide-ranging collection of superb essays from some of today’s finest scholars and historians writing on the wars in Vietnam. Jensen and Stith have assembled a stellar cast covering multiple facets of a complex war—political, military, social, and cultural—to produce a panoramic view of one of the twentieth century’s most consequential conflicts. An impressive and important contribution to the literature on Vietnam.”—Gregory A. Daddis, author of Withdrawal: Reassessing America's Final Years in Vietnam

“Geoffrey W. Jensen and Matthew M. Stith have assembled a team of the leading scholars on the Vietnam War to allow readers to sample some of the best of the new scholarship in this burgeoning field.  From postwar struggles in the highlands of Laos, to the student movement on the campuses of the US home front, to the halls of power in Beijing and Moscow, to the shelves of US comic book stores, Beyond the Quagmire has something for everyone and serves as an invaluable snapshot of the historiography of the Vietnam War at the present moment.  This book deserves a spot on every Vietnam War bookshelf.”—Andrew Wiest, author of The Boys of ’67: Charlie Company’s War in Vietnam

"Beyond the Quagmire is a thoughtful and timely volume that brings together some of the best new scholarship on the Vietnam War. This well-conceived and wide-ranging collection should quickly prove its worth in the classroom."—Beth Bailey, author of America's Army: Making the All-Volunteer Force

"Outstanding collective scholarship. . . . Beyond the Quagmire is an extraordinary contribution to the growing body of Vietnam War literature."--Midwest Book Review

"[W]ell-thought-out takes on important political, military, and cultural issues. Among the best are Heather Marie Stur's 'Women, Gender, and the War,' a nuanced portrait of women who served."--Publishers Weekly

"The best of the essays are Nengher Vang's treatment on the Hmong and Xiaobing Li's review of Chinese involvement in the Vietnam War and Sino-Soviet relations. Ron Milam's article on the role of military advisers, Susan Eastman's on the 'Nam comics, Doug Bradley's on music and memory, and Heather Marie Stur's on women, are all noteworthy additions."--VVA Veteran

"[A] superb compilation. Many of these essays are thought provoking and highly debatable, and they relook various areas of the Vietnam War with a fresh eye. Still, others are highly informative, which should lead readers to seek further study on specific topics. In total, it is a volume that looks at the past, successfully draws parallels to the present, and seeks to foresee aspects of the future."--Military Review

"Beyond the Quagmire is a very valuable work for anyone with an interest in the Vietnam War or American policy in Asia."--The NYMAS Review

"[T]his collection adds significantly to the ongoing discussion of the war from new sources, methodologies, and interpretations. . . . [A] superb collection of essays."--Journal of Military History

"Beyond the Quagmire is a remarkable achievement for which Jensen, Stith, and this eminent group of accomplished contributors should be most commended. Of particular value is this work’s multidisciplinary approach, strength of research, and provocative call to extend scholarship on the Vietnam War past stock formulations. Beyond the Quagmire is a stimulating and innovative contribution to a more nuanced understanding of this pivotal conflict. In this exceptionally fine volume, Jensen, Stith, and their talented authors deftly illuminate innovative directions for forthcoming analysis. Their endeavors are an extraordinary collaboration that should be required reading for anyone interested in the Vietnam War, what we already know about it, and what we have yet to learn."--Marine Corps History

"This collection of essays makes a number of points, with certain themes standing out as revelations. . . . The essays in Beyond the Quagmire contribute much toward lifting Vietnam beyond the lingering guilt and confusion of the Vietnam era."--On Point

GEOFFREY W. JENSEN is Associate Professor of History at Embry-Riddle Aeronautical University, Prescott, Arizona. He is also the editor of TheRoutledge Handbook of the History of Race and the American Military.  MATTHEW M. STITH is Associate Professor of History at the University of Texas at Tyler and the author of Extreme Civil War: Guerrilla Warfare, Environment, and Race on the Trans-Mississippi Frontier.
Loading...
or
Not Currently Available for Direct Purchase